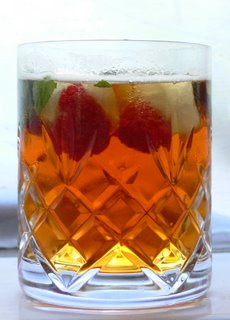 Summer in the UK is a fragile, short-lived and unreliable thing (yesterday, in flaming June, we had tornadoes and hailstones), so when the sun shines and the air is balmy, especially here in Cambridge, we tend to overcompensate slightly with garden parties, great strings of barbecued sausages, silly hats, flowery frocks and that sine qua non of chi-chi English outdoor gatherings: a few jugs of Pimm’s Fruit Cup. A sweet, pinkish liqueur based on gin, Pimm’s is available in every off-licence and supermarket in the country; and we mix it with lemonade and what bemused foreigners interpret as a fruit salad, kick back and proceed to get completely sloshed in the sun. There’s a certain class thing at work here. Shakespeare in the Park? We drink Pimm’s. Wimbledon? Pimm’s. May Balls? Pimm’s. Opera at Glyndebourne? Pimm’s. We also drink it because it’s delicious, potent and tends to render pretty 20-year-old students of both genders delightfully cuddly.

This fruity, aromatic, rounded cocktail base was invented by James Pimm, who ran a tavern in the City of London. He came up with the drink, based on gin with fruit, herbs and quinine, some time in the 1820s, soon finding it was so popular that he was able to produce it on a large scale to be sold to other taverns and clubs. It’s been a popular summer drink ever since, although the amount of alcohol in the stuff has definitely been reduced by the company that now owns the trademark (Pimm’s has in my lifetime reduced its alcohol percentage from 35% ABV to 25%). You can remedy this by adding a splash of gin to your cocktail. 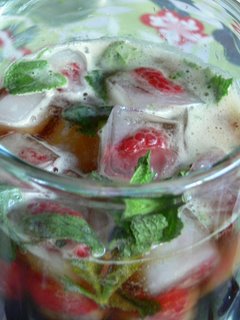 Pimm’s is a substance sadly missed by those who come to the university here for a year or so from overseas. When visiting friends we made at university who have since moved back to America or other Pimm’s-free lands, we usually try to bring a bottle for them so we can all spend an evening reliving our glided youth. But I bear glad tidings for the overseas summer alcoholic. You can actually make the base mix for your Pimm’s (which we shall now call ‘fruit cup’ – and indeed, Pimm’s is not the only available brand; try Plymouth Fruit Cup for a rather more aromatic option, or Stone’s Fruit Cup for a distinct ginger kick) out of a mixture of liqueurs you may well have in the drinks cupboard already – use 2 parts 40% gin, 2 parts red vermouth, 1 part Cointreau (or your favourite orange liqueur), 1 part sweet port and a dash of Angostura bitters. It’ll be a bit stronger than the pre-bottled stuff, but it tastes very fine indeed. If you do decide to make your own fruit cup from scratch, Hendrick’s gin, with its cucumbery overtones, really comes into its own here – and if you use Dubonnet for your red vermouth, you can award yourself the Queen Mother seal of approval: Dubonnet was her all-time favourite liquid.

You should build your drink in a large jug by gently muddling a small handful of mint in 1 part Pimm’s or home-made fruit cup, then adding 1 part lemonade and 1 part ginger ale, with a good handful of soft English summer fruits, some sliced cucumber and fresh mint bobbing about in the jug with some ice. I like raspberries frozen into ice cubes, so they float rather than sink to the bottom initially – this means that you can arrange for some raspberries to end up in everybody’s glass, and the freezing makes the cell walls burst, so once the cubes have melted, the liquid at the bottom of your glass will be syrupy with raspberry juice. Borage flowers (a blue flower with a taste reminiscent of cucumber) are a traditional addition, and look lovely in the drink if you can find them. One jugful will be enough for a lovely boozy evening for two.