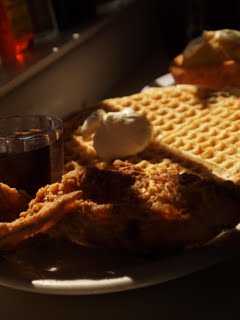 There are flavour combinations out there that sound barking mad until you try them. Witness the blissful comings-together of Cheddar cheese and Christmas cake; chocolate and hare; fig and prosciutto; strawberries and Balsamico. But how do you feel about fried chicken, breakfast waffles and maple syrup?

As it turned out, I discovered that I felt remarkably good about the idea, so took the opportunity to drive down to South Phoenix, where you’ll find Lo-Lo’s (Lo-Lo has just opened another branch in Scottsdale, but it’s the original restaurant just south of Downtown Phoenix that we’re concerned with here.) It’s a little shack of a soul food restaurant in an area full of hand-painted warnings about vicious dogs, barbed wire and abandoned cars. Park in the yard behind the restaurant, hurry around to the entrance on the other side of the building, grab a seat at a counter or one of the tables, and get to grappling with the menu.

The main event here is the chicken and waffles, and the menu offers you about a dozen different chicken/waffle combinations, like Sheedah’s Special (a breast, a wing, a waffle), Lil Amadt (a leg, a thigh, a waffle), and Lo-Lo’s (three pieces of chicken, two waffles). If waffles aren’t your thing, there are grits or fries; and you can sample collard greens, home fries, candied sweet potatoes and other things of the sort it’s very hard to stop eating, all of which come as part of those combos or as side orders – try the cornbread with honey butter, crisp on the outside and light as a feather inside.

We ended up visiting twice, so we could explore a bit more of the menu. Drinks, served in massive Mason jars, are really good fun – sweet iced tea, silky with so much sugar syrup that your eyeballs hurt; home-made lemonade; Kool-Aid (the red sort only); Cherry Pepsi (which sent me into a Proustian reverie about the cans of cherry cola in my prep-school lunchbox). The fried chicken in Lo-Lo’s very delicately spiced batter is delectable, pressure-fried so hot that the coating comes out dry and perfectly crisp, the chicken inside moist and succulent. The fat is scrupulously fresh – enormous refuse hoppers out back for the old fat demonstrated that it’s changed very regularly, and you can taste this in what’s on the plate. Waffles are light and puffy, with a dollop of whipped butter and a little glass ramekin of maple syrup, which you’ll find yourself sloshing all over everything on your plate. 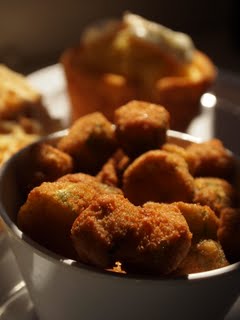 Every table sports a squeezy bottle of honey and some Trappey’s hot peppers in vinegar – the pepper vinegar is meant for your collard greens, but I found myself drizzling the intensely fruity, spicy liquor all over the fried chicken and everything else I was eating. The kitchen also produces something called Chyna’s honey hot sauce, which tasted a lot like a vinegar-based hot sauce like Frank’s blended with honey – we dipped wings in it and pronounced it just splendid. The fried okra in cornmeal is, I think, bought in frozen, which is a shame; that said, once doctored with some pepper vinegar we found ourselves ordering it twice, so perhaps the frozen-ness isn’t such a disaster.

The atmosphere at Lo-Lo’s is fantastic – we got chatting to neighbouring tables, found ourselves engaged in deep conversation with the waiters and bemoaning the UK’s useless absence of chillies in vinegar. Ultimately, I’m rather relieved there’s nothing like Lo-Lo’s round here; I’d be having serious trouble fitting into my trousers if there was. But if you find yourself in Phoenix, you’d be mad not to go. This is food with real heart – you can see why they call it soul food – and it’s more delicious and less expensive than anything else we ate in the city.