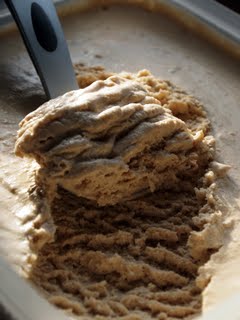 For years, I thought I didn’t like hot buttered rum very much. An oily smear of butter floating on a thin pool of rum-flavoured hot water – nobody’s idea of fun. And then last winter, I saw someone in a restaurant at Lake Tahoe (Ciera at the Montbleu hotel – pricey but pleasant) drinking a creamy, hot, cinnamon-smelling glass of something wonderful. I asked the waiter what it was – hot buttered rum. I ordered a glass: rich and buttery, spicy, full of heat and kick from the rum, and silky smooth. How did they get it to emulsify in the glass like that? The waiter said he wasn’t allowed to give me a recipe, but did say that the chef made it with a sort of batter he prepared using butter and ice cream, and kept it in the freezer. It’s the ice cream which makes the mixture, butter and all, emulsify so pleasingly and creamily in the glass (or mug, if you’re at home); and a tub you’ve made for yourself will keep for months in the freezer, so it’s an excellent thing to have on hand for surprise guests. As far as Christmas/winter drinks go, this one’s approximately 100% bad for you (do not do what I did last night and have four of them in a row if you don’t want to feel a bit unwell), which unfortunately means it’s also about 100% delicious.

I made up a few different sets of batter from recipes I found on the Internet. None of them really hit the spot; in common with a lot of American recipes, I found most of them very, very sweet and a bit bland, relying on the vanilla ice cream for much of their flavour. The recipe below is my take on things, rather less sugary than most of the US recipes. I’ve also used maple syrup along with soft brown sugar for its flavour; and I’ve spiced quite aggressively, especially when it comes to the nutmeg, which has a wonderful affinity with rum. Allspice, like the rum, is Jamaican in origin, and works incredibly well here. And don’t save this mixture just for dolloping in your hot rum and water: as I write this, I’m drinking a lump of the stuff dissolved in a strong mug of coffee, and it’s heavenly.

Things like this make winter a bit less grim.

To make just over a litre of batter to keep in the freezer, you’ll need:

Let the ice cream sit at room temperature until it’s the texture of whipped cream. (You can also make this once the ice cream is completely melted, but I prefer the lighter texture you can achieve using a half-melted tub.) In a large bowl, use an electric whisk to cream together the butter, brown sugar and maple syrup until you have a thick, fluffy mixture. Dump the spices on top with the ice cream and continue to whisk for about five minutes, until the batter is smooth and light. Transfer to containers for freezing.

When you come to make up your drink, just put a dollop of the mixture at the bottom of a mug or glass (I like about three heaped teaspoons in a small mug – your mileage may vary) and add a measure of rum with a small pinch of salt. The salt won’t make the drink salty, but it will act to lift the buttery flavour. Pour over water straight from the kettle to fill the mug, stir until the batter is dissolved, sit down in front of the fire and get drinking.