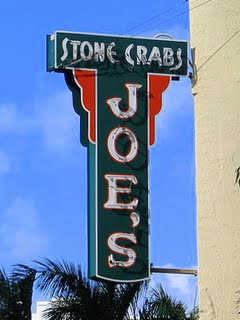 I was, I’ll admit, a bit nervous about the restaurants in Miami. A couple of American friends had told me that they found the food in Florida “unsophisticated” and “boring” – thankfully, this really wasn’t my experience. (Outside the Disney parks, that is, where you will drive yourself mad trying to find something to eat that isn’t a pretzel, a sausage of some sort or a funnel cake.) We found some really interesting, innovative eating in and around Miami – traditional American at Michael’s Genuine, some great tapas with a very individual twist at Sra. Martinez and a simply astonishing bento box at Naoe, which I’ll give its own post later on.

Joe’s Stone Crab isn’t exactly innovative, having been serving up the same stuff for nearly a hundred years, but it came highly recommended by almost everybody we spoke to. At the southern end of Miami Beach, it’s easy to spot by the long line of Aston Martins and Ferraris queuing for the valet parking. The restaurant does not accept reservations. Your best bet is to visit mid-week, or you’ll be looking at a two-hour wait for a table. We went on a Thursday lunchtime, and were shown to a table indoors straight away; there was a 30-minute wait for an outdoor table.

Joe’s started out in 1913 as a seafood shack. It really came into its own in the 20s, when Joe Weiss discovered that the local stone crabs, previously passed over as inedible, had enormous, sweet, meaty claws. No, I have no idea how such a thing as a crab with giant claws might have come to be ignored by restaurateurs either, but that’s the story. These days the place only opens in stone crab season (late October to May), and then offers a reduced service until August. The crab claws are still served cold with the original accompaniments: a sharp, mustardy mayonnaise, a vinegary fresh slaw, hash browns and roasted tomatoes or creamed spinach. There’s also a large menu of other seafood, alongside fried chicken and steaks for the fish-phobic.

Despite those cars outside, the remarkable bling encrusting a lot of the women diners and the flotilla of designer labels, you don’t have to spend a fortune here, although some care in ordering is required. At lunchtime, the restaurant is offering a recession-busting “Great Lunch Bailout” menu, with a coleslaw starter, three enormous crab claws (trust me – these are so rich you won’t want any more), a positive Everglade of garlicky creamed spinach, a big patty of skillet-fried hash browns, the mustard mayonnaise, drawn butter, a slim slice of key lime pie and a coffee. The whole lot rolls up at $29.95. 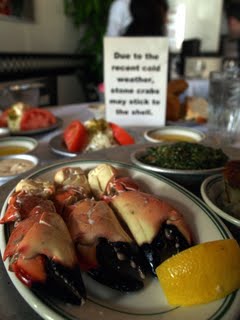 I decided to embrace my status as a tourist, and wore the proffered bib. I’m very glad I did – the claws are ready-cracked, but I still managed to spray us both with liberal amounts of butter and crabby juices. A polite notice informed us that the recent cold weather (so aberrant that nobody in town seemed able to talk about anything else for the week we were there) meant that the meat from the claws may stick to the shell. It didn’t, but this is still a messy eat. There’s more here than you’ll be able to eat; be careful to save some room for the excellent pie. The crab is the main event here, and it’s downright fabulous – dense, sweet, rich and full of meat.

It’s such a simple meal that I find I’ve little else to add. Head over if you have the chance to visit this gorgeous, sunny city, and don’t bother exploring the rest of the menu. These crabs are something you won’t find outside Florida, and they’re a local delicacy so good that you’d be cheating yourself if you didn’t snap up a few claws while you’re there.