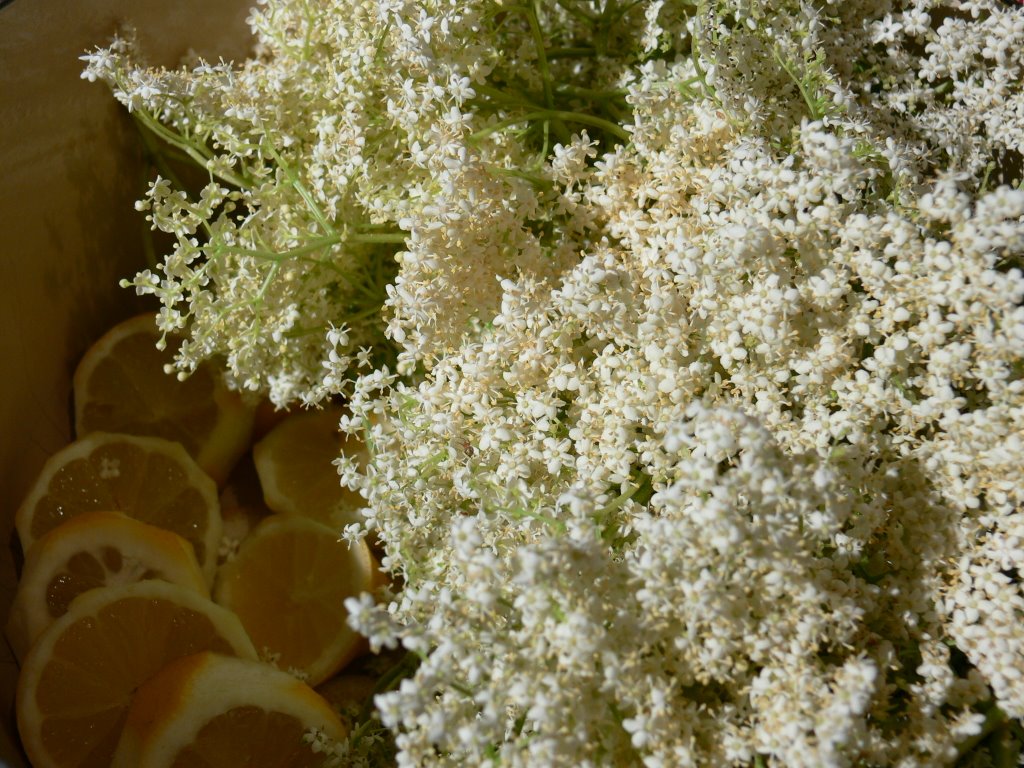 A quick reminder – it’s that time of year again, so if you’re in a foraging mood, spend some time this weekend harvesting some elderflower heads for cordial and fritters.

You may also enjoy this article from the Times on wild foods, especially if your garden is as full of nettles as mine is, but please do not follow Prue Leith’s example and raid the nests of wild geese for eggs unless you want a serious telling off from the RSPB! If you really can’t live without a June goose egg and you’re near Cambridge, head to the fruit and veg stall outside the Grafton Centre, where they often have a large tray of goose eggs to buy. 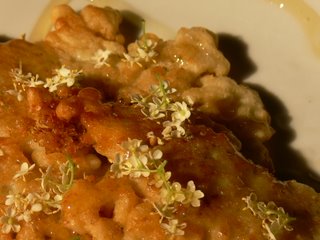 I spent yesterday making this year’s batch of elderflower cordial. The wet weather earlier this year in the UK seems to have been a great thing for the elder bushes, which are positively groaning under the weight of all their flowers. The flower heads were so heavy with creamy pollen that I picked six extra heads to turn into fritters.

Foraging is brilliant. There is nothing like the warm glow you get from eating food which is, to all intents and purposes, free; it’s also a great pleasure to know that the food you’re eating is from a healthy environment (be careful to pick your elderflowers well away from any roads, and, as always, leave plenty of flowers on the bush – you’ll want them to turn into berries later in the year) and is perfectly fresh. Look for blossoms which are in full flower, and which have not yet started to brown or drop petals. For fritters, try to pick the heaviest, most pollen-filled flower heads you can find about three hours before you cook them. Pop them in the fridge in a plastic bag. Their scent will develop after picking and they’ll be very perfumed when you come to cook them (don’t leave the flowers in the fridge any longer than three hours or their scent will start to turn in the direction of cat wee). 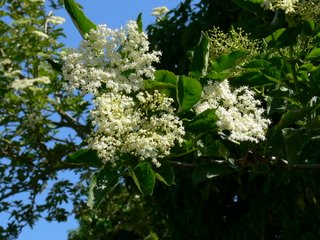 Using a fork, beat the egg, flour, sugar and milk together with the lemon zest. Squeeze the lemon and put its juice aside. Let the batter rest for an hour.

In a large, non-stick frying pan, heat about ½ cm of oil over a high flame. Check the elderflowers for any arthropod inhabitants, but don’t wash them (you want to hold on to that pollen). Hold a head of elderflowers by the stalk and dip the flowers into the thick batter, then drop them, flower side first, into the hot oil. Fry the fritters in pairs so you don’t crowd the pan; they’ll brown better this way.

Turn the fritters after about two minutes – the flower side should be a golden, crisp brown. Fry until the stalk side is also crisp, then remove from the pan and drain on kitchen paper.

Remove to a serving plate and scatter the perfumed fritters with some fresh elderflowers, pulled from their stalks, and drizzle with the honey and lemon juice. Serve piping hot and crisp. 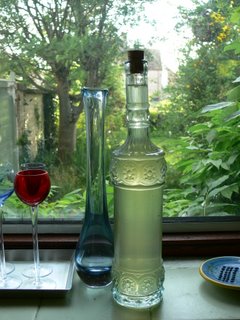 I love cooking at this time of year. Ingredients are quite literally falling out of the trees into my always-ready pan. Elderflower cordial, diluted with still or sparkling water, is the quintessential English summer drink. It’s also fantastic in many desserts with gooseberries; try adding some to the mixture next time you make gooseberry fool. It’s got savoury applications too, and is good in a chicken marinade.

I’ve recently discovered a very good Martini made with gin (Hendricks for preference), elderflower cordial, lemon zest and lots of ice. This recipe will make you plenty of cordial, so you’ll be able to experiment with it in cooking and cocktails all you like. It’s also joyously cheap, especially when compared with the cordial you buy in the supermarket. Elder bushes are in flower in June, and you’ll see them all over the place, their flat, white flower heads on display. (You can also cook the flowers in fritters for a delicious dessert.) Pick, if at all possible, away from roads. Be careful that the flower heads you pick are fully open, but not starting to go brown; the plate-like head should not lose any flowers when shaken. Don’t take too many flowers from any one bush. You’ll want some in place to make elderberry and apple pie later in the year. Make the cordial as soon as you get home. The flowers lose their freshness quickly, even in the fridge, and start to smell like nothing so much as a horny tom cat. (Don’t let that put you off; the cordial itself tastes and smells ambrosial.)

To make around 2.5 litres of cordial, you’ll need:

Put the sugar and water into a large pan, and slowly bring up to the boil, stirring now and then. While the pan is coming up to temperature, remove the zest from the lemons and place it in a large bowl (big enough for all the ingredients) or a large pan. Slice each lemon into four and put the slices in the bowl with the zest and the elderflowers. Don’t wash the elderflowers, but do check there aren’t any little creatures living in among them.

When the sugar/water mixture is boiling, stir it to make sure all the sugar is dissolved, and take it off the heat. (It will be disgustingly hot. Be careful.) Use a ladle to pour the sugar syrup over the elderflowers and lemon. When all the syrup is in the bowl, stir in the citric acid and cover with a teatowel (or the lid if you are using a pan).

A note of warning – citric acid has, for some reason, been very hard to get hold of this year. Most chemists should carry it, and brewing supply shops and Indian supermarkets will also sell you packets. The chemists I spoke to this year said that the suppliers have had a problem, and this certainly seemed to be the case; I only found some in my fifth chemist. You need the citric acid as a preservative, so don’t try to make this without it. Tartaric acid (not cream of tartar) can be used instead. (**Update** When making my 2007 batch, I gave up on trolling around all the chemists in Cambridgeshire and ordered the citric acid online from Edict Chemicals, where it’s very inexpensive. Take a look – they’ve got some interesting food and household ingredients on offer.) 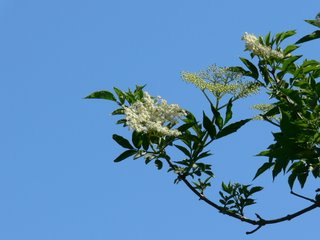 Leave the flowers to steep in the syrup overnight. Strain the resulting mixture through a square of muslin in a sieve the next day, and bottle with tight stoppers. This keeps well (especially in the fridge), but just to be sure, I like to freeze some for Christmas, when we all need to be reminded that there is a sun that’s not watery, and that the sky is sometimes blue. Drink deeply. It’s good stuff.