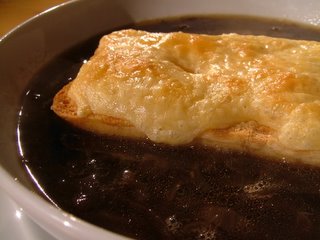 A friend of mine is visiting New York for work at the moment. I received an anguished message from him about a French onion soup he experienced at the Crowne Plaza off Times Square. I quote him in full, because it made me laugh.

‘The soup itself is quite nice, but is plugged by a solid lump of melted cheese that is about the diameter of a Camembert, and an inch think. We’re talking essentially an entire Camembert’s worth of American plastic cheese. I don’t mind a delicate top to the bowl, but you could have taken this out, chilled it, and made plastic cheese sandwiches for a hungry family of six.’

Poor him. (I am keeping him anonymous so he doesn’t get any death threats from Americans fond of plastic cheese.) French onion soup isn’t really that hard to get right, but not many restaurants seem to bother trying; the very worst I’ve ever had was, shamefully, in Les Halles, the old market district in Paris. Les Halles is meant to be the birthplace of French onion soup, and Le Pied au Cochon is meant to be a restaurant which specialises in the stuff. Ha. It’s rubbish. The stock’s insipid, the rubbery onions haven’t been left to caramelise, and there’s no booze in sight. The cheesey bread lid is mostly bread, and the whole leaves you with the sort of hurt feeling you get when someone you trusted has stolen your teddy bear and sold it to buy drugs. Avoid.

The cheese you use here is important, but you do have a choice open to you. You can do it the Les Halles way and use Camembert on your giant crouton, which is delicious and, when stirred into the soup, makes it creamy and cheesey and gloopy and glorious.

I consider we’ve been overdoing the soft washed-rind French cheese thing recently (I have discovered a local source of Epoisse, and that Tartiflette the other week had enough Camembert in it to keep your arteries busy for a good six months). So I went the other way with our croutons, and topped them with sweet, stringy Gruyere (actually Swiss, but who’s checking?). Gruyere has a special affinity for the sweetly Madeira-caramelised onions in this soup; try it instead of Camembert some time and see what you think.

To serve six as a starter or four as a main course, you’ll need: 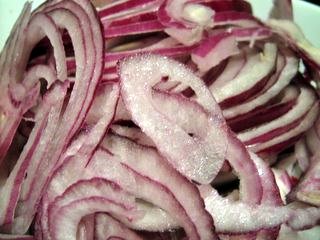 Put the onions in a large, heavy saucepan with the butter, and simmer, stirring every twenty minutes or so, for longer than you think you should. You’re aiming to cook these to a golden, caramel unctuousness. I didn’t use a kitchen timer; I put the DVD of Ziegfeld Girl on and sang along with Judy, running to the kitchen occasionally to stir, until Lana Turner did her tragic thing with the stairs and the chaise longue at the end. (Those who are not Judy Garland fans can just set their timers for 132 minutes, but you’re missing a treat.) The onions will have cooked down to a fraction of their original volume.

When your onions are done and you have spent a quiet five minutes being surprised at how Hedy Lamarr was able to look fantastic walking down stairs with fruit on her head and invent spread-spectrum communications without turning a hair, throw the Marsala into the hot pan with the onions and let it simmer away to nothing. Add the stock or consommé, turn the heat right down and bring slowly to a simmer again. 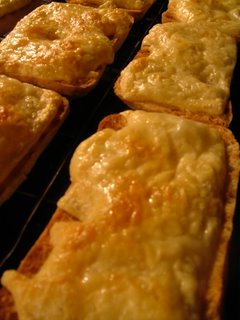 While the soup is coming up to temperature, prepare the croutons. Toast thick slices of bread (I used a grill pan to get good dark, charred lines on each slice), lay the cheese on them and put them under the grill until the cheese starts to brown.

Serve the soup with a crouton floating on top. The soup should soak into the crisp crouton, its heat softening the cheese. Slurp the lot quickly while it’s still deliciously hot.