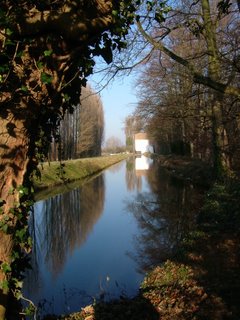 Lode Mill, a working, eighteenth-century water mill, is in the grounds of Anglesey Abbey, a Jacobean house near Cambridge which is built on the grounds of a medieval priory. The mill itself operates on the first and third Sunday of every month (subject to the water level), and is open to the public who can view the mill workings, and buy the oatmeal and wholegrain flour produced there. Saturday’s visit to the winter gardens at Anglesey Abbey saw me buying up armsful of flour bags and quizzing the miller in enormous detail, all to keep you happy. 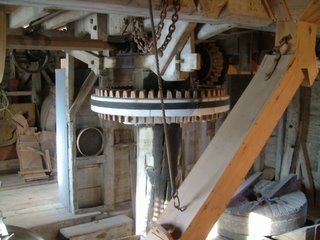 There has been a mill on this site since the Domesday survey, but the current mill is only about 300 years old. The building has four storeys; a ground floor; a stone floor where the mill stones are kept and operated; and two upper storage floors. This huge central shaft (the wheel you can see here is the spur wheel which drives the gears under the mill stone) is made from a whole sweet chestnut trunk; other wood in the mill building and wheels is seasoned oak, which, according to the miller, is as hard as iron.

There are four pairs of stones, each of which has to be dressed (cut with chisels) every ten uses to keep them sharp for grinding. The resulting flour is pushed from the outside edge of the mill stones and falls down a chute to the ground floor. It takes 30 seconds and ten tons of water to make 1 ½ kilograms of flour.

If you’re using wholemeal flour for bread, it’s a good idea to mix it with some strong white flour. An all-wholemeal loaf made at home can be chewy and dense; it’s especially hard on very young jaws. (A primary-school aged Mr Weasel was, in an episode he recites every time he eats a sandwich, told off by a school dinner lady for hiding a homemade, wholemeal sandwich in his pocket; he wanted to get out of the dinner hall and play, but chewing the bread was taking so long his friends had left without him.) For one large loaf you’ll need:

Half an hour before you start, put the flour in a warm place.

Dissolve the yeast and honey in half the water. Put the warm flour in a large bowl with the salt and make a well in the centre. Pour all the yeast and honey mixture into the well, and mix with your hand until it’s all soaked into the flour. Add the rest of the tepid water and continue mixing until you have a soft dough. Knead for ten minutes to develop the gluten in the dough; you should end up with a soft, stretchy mass. Return it to its bowl. 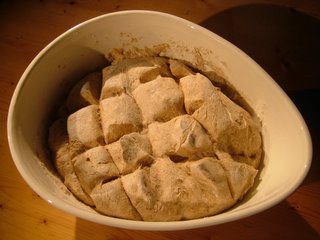 Flour the top of the dough and use scissors to score it; this will help it to prove faster. Leave it somewhere warm until it has doubled in size (an hour or so in a warm room), then knock all the air out of it, kneading for a couple of minutes. Divide the dough into six pieces, and form them into balls. Arrange the balls in a cake tin, flour them and leave the tin in a warm place again until the bread dough has doubled in size once more. 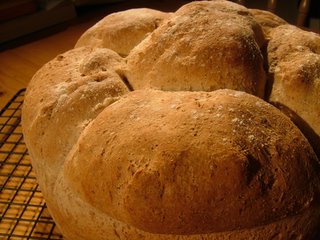 Put the tin gently (without knocking it about) in the oven at 225°C for half an hour. Check to see that the bread is done by taking it out of the tin and tapping the bottom; if it sounds hollow, it’s ready. (Be careful; wholemeal bread takes a bit longer to cook than white bread does. Exercise judgement.)

This flour makes a lovely, malty bread. Enjoy it toasted with honey, and bask in the smell filling your house.

12 Replies to “Wholemeal flour from Lode Mill, Cambridge – and a loaf of bread”