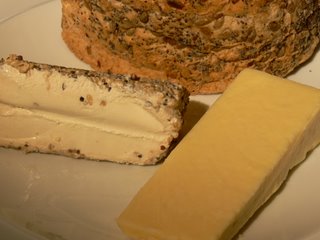 Here in Cambridgeshire, we’re recovering (via thunderstorms) from a heatwave. I don’t know about you, but there are certain kinds of weather which make me feel like I really can’t handle hot food. Cold things on bread are what’s in order. Happily, I’ve been fortunate cheesewise recently; Lorna, a Cambridge reader had been to Lancashire and brought a slab of something called Lancashire Tasty back with her, and I had found a large hunk of Gruth Du (Black Crowdie) in a Bury St Edmunds delicatessen.

The Lancashire Tasty is on the right. Three Lancashire cheeses were on offer, said Lorna; Crumbly, Creamy and Tasty. She asked which was which and was informed (I can’t replicate the accent she used here in print, but believe me, it was good): ‘Ah, lass. Crumbly’s crumbly, Creamy’s creamy, and Tasty’s tasty.’

Finding ‘Tasty’ the most apt of the three adjectives offered, Lorna toted a chunk all the way back to Cambridge for me – thank you very much.

They weren’t kidding. It was very, very tasty. This is a very sharp, lactic cheese; the sort that makes your salivary ducts ache with work. It was exceptionally good with a soft, brown, seeded bread. I like the Duchy Originals Mixed Seed or Sunflower Seed and Honey breads, both of which are organic. You can find them in most good UK supermarkets. I’d like to try cooking with this cheese (impossible, sadly, since it was so good we ate it all in one go so there wasn’t any to experiment with). I suspect a very, very good souffle could be made with it; it’s got enough bite for the flavour to continue to sing through when cooked. My parents-in-law are separated from Lancashire by the Pennines. I shall have to take up mountaineering next time we visit. 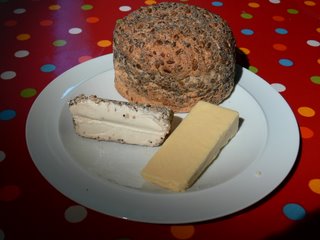 I bought the Gruth Du (on the left) because I thought it might be the same as a mystery cheese I ate about 16 years ago and haven’t been able t0 find since. Scottish readers might be able to help me out here; it was 1989, and I was playing in a youth orchestra at the Edinburgh Festival. The kids in the orchestra were put up at Napier Polytechnic (now Napier University), where the food was infinitely better than could have been expected. There was breakfast haggis and white pudding, and a cheese course with the excellent supper. The curiously wonderful cheese was, like Gruth Du, soft and rolled in oats, but its texture and taste were closer to butter than to cream cheese. The mystery cheese’s oats were, I think, toasted.

This Gruth Du was not anything like the mystery cheese, but it was excellent; rolled in oats and cracked black pepper, it’s a sharp, sour, almost lemony cream cheese, and we enjoyed it with oatcakes. I found it at Barwell & Co in Bury St Edmunds (39 Abbeygate Street, 01284 754084). If you’re in the area, do check them out; they sell some excellent pies, good local meats and a selection of really interesting delicatessen products.

A page from the BBC on Scottish cheeses makes me think that the buttery wonder might have been Caboc. If any readers of a Scottish bent have any more information about it, I’d love to hear from you.

The Tasty was from Leagram Organic, by the way. (It seems to be called ‘mature’ on the website). Far better, I think, than Mrs Kirkham’s.

There’s a Lancashire cheese website here, which tells you all about producers (of whom there are apparently only 10).