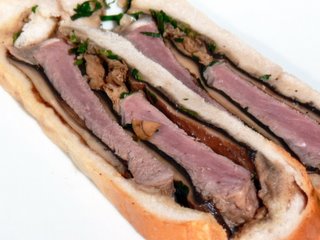 I first came across this recipe on the Two Fat Ladies’ television show a decade or so ago. Their version of a shooter’s sandwich was very plain – just a steak, salt, pepper and two Portobello mushrooms inside a hollow loaf of bread. My recipe for this perfect picnic food is a bit more exciting, with more steak, more mushrooms, plenty of garlic, fresh herbs, some sauteed wild mushrooms and a generous spiking of vermouth. It’s delicious, and it looks so fantastic when you slice into it that your fellow picnickers will be speechless first with awe and later because it’s very hard to talk through a mouthful of mushrooms and meat.

The sandwich looks complex, but it’s very easy to prepare. The secret is in the long pressing it receives between two chopping boards. To make enough for four (alongside other picnic nibbles) you’ll need: 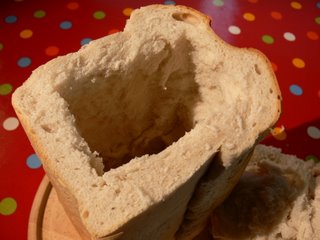 Cover the dried mushrooms (I used a mixture of porcini, shitake and oyster mushrooms) with boiling water and set aside. Slice one end off the loaf and hollow out the middle, setting the soft crumb to one side.

Saute the steaks, seasoned with pepper but without salt, for two minutes per side in the olive oil. Remove to a plate. It is important that your steaks are rare so that they give up their moisture to the sandwich when pressed.

Reduce the heat and melt one knob of butter in the pan with the olive oil from the steaks. Saute the Portobello mushrooms with two smashed cloves of garlic until the mushrooms are soft and starting to release their juices. Transfer to the plate with the steaks.

Melt the other knob of butter in the same pan, and drain the dried mushrooms, reserving their liquid. Saute the dried mushrooms with two more smashed cloves of garlic for about five minutes, then add half the soaking liquid and the vermouth. Simmer until all this liquid is reduced to a few tablespoons of glossy syrup.

Season the steaks and mushrooms with plenty of salt and some more pepper. Build layers of steak, Portobello mushrooms, wild mushrooms and herbs inside the loaf until you have used everything up – if any cracks appear in the loaf, patch with the crumb you reserved. Pour any juices from the plate into the sandwich with the liquid from the pan. Wipe the cut end of the loaf in any remaining pan juices and put it back on the loaf. Wrap the whole thing in three layers of greaseproof paper and tie up tightly with string. 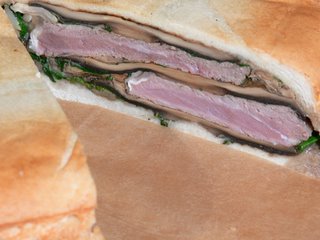 Place the loaf on a chopping board so the steaks are lying horizontally. Place another chopping board on top of the loaf and weight it down – I used two large, cast-iron pans and both sets of weights from the scales. Leave the sandwich (no need to refrigerate) for five hours.

Serve the sandwich by simply slicing through the whole stuffed loaf with a breadknife. The steaks will be juicy, the pressed mushrooms silky, and the whole thing full of concentrated flavour. If it’s too late in the year for picnics, don’t worry; just serve with some hot sauteed potatoes for a filling supper. Make a martini with some more of the vermouth if you feel that way inclined, and enjoy.