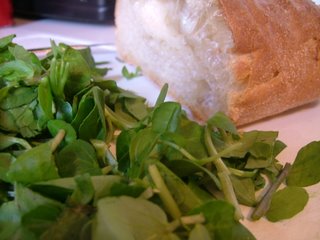 A friend tells me that there’s watercress growing in one of the wet bits of fen round here. I’ve been out combing the countryside and can’t find it – and my friend (who will become an ex-friend if this continues) will not tell me exactly where it is so he can eat all of it.

In the meantime, I’ve been buying my watercress in the shops and at the market. There’s plenty on sale at the moment, so head out and buy some. When you make this soup, try to find watercress with plenty of stalk – there’s a lot of flavour in the parts you wouldn’t necessarily use in a salad.

This soup is simple and delicious; it also freezes well, so you can make it in advance and bring it out when you have guests. When reheating, try not to bring it to a rolling boil – you’ll lose some of the lovely green colour if you overcook the watercress.

For a starter for four, you’ll need: 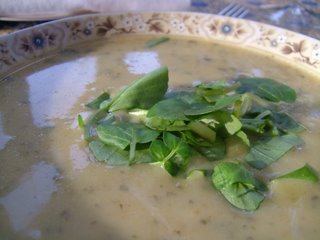 Chop the watercress roughly (if you have any stalks left over from salads you’ve made, you can store these in the freezer until you make this soup and add these too) and add it to the pan, stirring for about a minute until the cress has turned a vivid green. Hold a bit of watercress back to garnish the soup with when you’re finished. Remove the pan from the heat and liquidise the soup in a food processor.

Return the soup to the pan and over a low heat add the cream and seasoning. This soup can be served chilled, like a Vichyssoise, but I prefer it hot from the pan with lots of crusty bread.