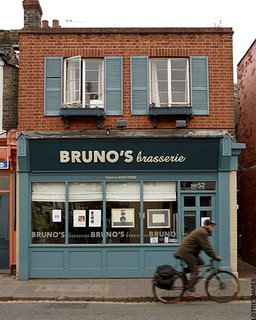 Update, 19 February 2008
Sadly, Bruno’s is closing after this weekend, doubtless to be replaced by yet another branch of Starbucks or Subway. Thanks to Dan for the tip.

Update, 10 July 2007
A thousand apologies to Dan from the River Farm Smokery in Bottisham, who is, in fact, responsible for the very lovely smoked tomatoes mentioned below – I mistook them for the restaurant’s own. Dan – I am still having dreams about those pigeon breasts you guys provided for the beer festival. Keep up the good work!

Cambridge isn’t exactly buckling under the weight of good restaurants. It’s odd; Cambridge is an affluent city, and the university gives it a really cosmopolitan feel which just isn’t reflected in its restaurants. We groan under the weight of a million branches of Pizza Express and chains like Café Rouge and Chez Gerard, largely thanks to the enormous property prices in the city, which mean that independent restaurants are hard-pressed to afford a pitch. There are still a few happy standouts (the place I live next door to, 12 miles outside the city, is one of them; email me if you want more details). Midsummer House, with its two Michelin Stars, is a very fine restaurant in the centre of the city, although if you, like me, are mildly annoyed rather than amused by some of the twiddles, froth and frills associated with molecular gastronomy, a visit can be a pain in the wallet you might prefer not to bear. Over in Little Shelford, Sycamore House (only open from Wednesday to Saturday) is excellent – I’ll post a complete review later this year.

Bruno’s Brasserie (52 Mill Road, Cambridge, CB1 2AS, Tel: 01223 312702) has been a Cambridge standard for good French bistro food for some years now. The restaurant used to have a Michelin star, and I’ll admit to being a little hornswoggled by some of the aesthetic changes they’ve made since losing it; the food remains very good, but the linen tablecloths and napkins have gone (to be replaced by nothing at all and sad paper squares), and the restaurant has repositioned itself as a ‘restaurant and gallery’. Cambridge happens to have some good galleries, especially along King’s Parade (check out Primavera when you’re in town for some really interesting paintings, jewellery, pottery, glass and sculpture). Bruno’s is not a gallery. It’s a restaurant which displays local painters’ work, sometimes pretty weak, for sale to diners. Acres of canvas does not necessarily make up for the lack of a tablecloth, especially when the paintings are a bit…you know. Still – on to the food and the wine. 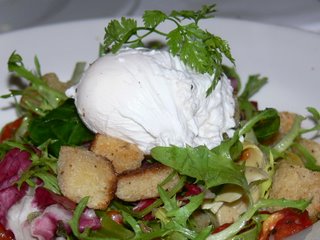 Linen and questionable paintings aside, I really like Bruno’s. It’s one of the few good restaurants I’ve found which can cater easily for large groups, and in the past I’ve been to events where friends have rented out half of the restaurant. Service was prompt and excellent even when there were thirty of us. This is good French food with some accents from other cuisines, so starters include this Salade Lyonnaise with a perfectly poached egg alongside more exotic dishes like the mussels in a lime and coriander broth.

The wine list is thoughtful and well-chosen, and there’s also a good cocktail list. The restaurant was very helpful with the wine when my friend celebrated a big birthday there, and allowed the pair of us to prop ourselves up at an empty table and taste a selection from the list. Three ‘palate cleansers’ are also on offer between courses: a champagne and vanilla sorbet, a very lovely passionfruit and lavender sorbet and a watermelon and vodka granita. These will cost you an extra £1.50, but they’re worth every penny. 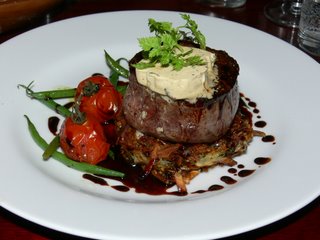 Main courses are built around really excellent cuts of meat. On previous visits I’ve enjoyed the belly pork (which is almost always on the menu). This beef fillet was cooked exactly medium rare (often a difficult task, for some reason, in British kitchens, many of which seem to only specialise in differing shades of grey). It sat on a crisp and delicate rosti, and was topped with a fierce and very tasty Roquefort butter – sometimes the restaurant also offers a foie gras butter. Those tomatoes you can see were a lovely surprise; they were smoked in the restaurant kitchen and served cold (although one of our dining companions said he would have found them much better if they’d been hot, like the rest of the dish). 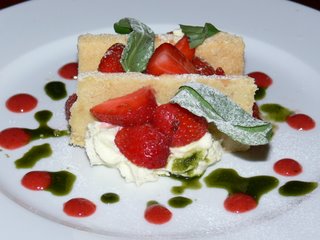 I felt like revisiting my 1980s childhood and ordered the strawberry and almond shortcake. This was served with basil leaves and a basil coulis (basil is a lovely herb with strawberries). The fragile, friable shortbread was delicately spiked with almonds, and the strawberries were cheeringly sweet given this summer of no sunshine we’ve been having. This reminds me – if the rain does stop any time soon, ask for a table outdoors on the lovely terrace.

If you visit Bruno’s, parking on one of Mill Road’s side streets or at the Queen Anne car park on Parkside is always available. The restaurant is popular, so you should be sure to make a reservation.