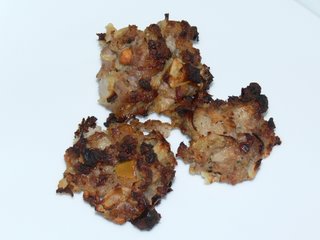 This was one of my Grandma’s recipes. She was not an awfully good cook (you can still make my mother pale by saying ‘trifle’ or ‘Grandma’s mushroom thing’ to her); she refused to turn the oven up to any sort of temperature which might make its insides dirty; she taught me to make an omelette out of nothing but eggs, butter, parsley and about half a bottle of Worcestershire sauce; and she used the kind of cottage cheese that comes with bits of pineapple in to make her lasagne. I miss her.

This recipe was one of her good ones, and we often make these very simple stuffing balls to accompany roast meats. To make about sixteen little balls, you’ll need:

Make up the stuffing mix according to the packet instructions, adding one tablespoon of butter with the boiling water. I much prefer good old Paxo to the wholemeal, organic, lumpy brown premium brands, but feel free to go with your favourite. Chop the onion and cored apple into dice about the size of a woman’s little fingernail. Chop the sage finely. 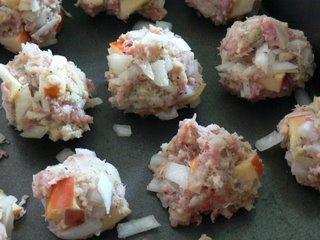 Put the sausagemeat (if good sausagemeat isn’t available near you, buy some good sausages and pop the meat out of the skins), stuffing mix, chopped sage, apple and onion in a mixing bowl, and use your hands to squash and mix all the ingredients together with some salt and pepper. Divide the mixture into small balls and arrange in a non-stick baking tray. Dot the stuffing balls with the remaining butter. Cook for 40 minutes at 180° C (350° F) and serve alongside your Sunday roast.