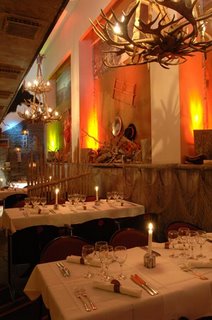 I’m afraid that this is the second review in less than a month that compels me to start with a wide-eyed appreciation of the toilets. The men’s toilets, in this case – one of our friends came down the stairs of this Lappish restaurant, eyes full of bloodlust, and told me I absolutely had to go and have a look at the corridor of death outside the loo.

It’s an Arctic taxidermist’s heaven. A not very aerodynamic-looking snow grouse dangles from the ceiling, stubby wings at full stretch. A small stoat in its winter coat clings rigidly to a bough. A wolf stuck in mid-howl gazes glassily into the distance, and an elk’s head (if it were mine there would be coats and hats hanging off the antlers) stares past a sad and very dead reindeer. Stiff ptarmigans point the way to the lavatory. A fox’s tail, nailed to the wall sans fox, yearns for a Davy Crockett to take it on adventures; and it took us a while, but we finally identified the spotty carpet-thing with holes where there might be legs as the peelings of a seal. In the restaurant proper, a brown bearskin looks insulted as flambéed bear meatballs are delivered to diners, and a little shelf by our table was heaped with detached antlers.

The Lapps like their meat wild, big and preferably with a great big arrow sticking out of it. It’s hard to object to animals as interior design when you’re also eating them.

Saaga (Bulevardi 34 B, 00120 Helsinki) is that rarest of things, a rather touristy restaurant serving really great food. As usual in Helsinki, the menu is available in a number of languages, and the English version was charmingly poetic – where else will you find dishes called things like ‘Fish of the Four Winds, Served on an Arctic Slate’, or ‘Hungry Like a Wolf’?

Your coat is taken by a gentleman in full Lappish costume (other examples of traditional dress are on display at the National Museum, but here they’re actually wearing them), and you’re invited to settle in with a drink. I asked for a Lappish Glimmer, one of those deadly concoctions that’s mostly pure alcohol (in this case brandy and a cloudberry liqueur with a couple of cloudberries bobbing in among the ice cubes) but tastes completely innocuous. The Finns are good at booze. For starters, I went for fried vendace (my new favourite fish) with Granny’s Pickled Cumbers. Granny’s cucumbers are a dead ringer for the cucumber salad I blogged here last year, and arrived in a wooden bowl with some baby vendace, flour-dusted and deep-fried, and a sour cream dip. Whitefish a la Lake Nakkälänjäarvi (try saying that after a Lappish Glimmer) was a slice of moussey terrine with a dollop of vendace roe on top, everything garnished with plenty of dill.

Dr W and I ordered Hungry Like a Wolf as a main course – a slab of honed wood tiled with meat. Smoked reindeer shank, elk fillet and a juicy reindeer fillet were bathed in a slightly gamey reindeer sauce, with turnip rösti and roast red onion prepared with birch tar on the side. Other main courses were just as spectacularly presented, with one of our friends being presented with a hunk of lamb (the wimp) on a wood and metal mesh box, a little flame burning away inside. Someone ordered the inevitable flambéed bear meatballs, and I begged a mouthful. I’m still feeling slightly guilty every time I catch the eye of my teddy bear, but these were great – bear is a marbled, slightly sweet meat with loads of flavour, and is only available in a limited number of restaurants in the city. A friend who moved out to Helsinki from England a few years ago tells me that there only a certain number of bears can be hunted for food every year, and that restaurants serving the meat require a special licence. If you can get past childhood memories of Pooh, Yogi and Balloo, it’s well worth trying, and the cepes, mashed potato and game sauce this came with were fabulous.

More of the baked cheese with cinnamon cream and cloudberries we tried at Salve was on offer. This time I tried pancakes (more blini than crepe) with more cloudberries and a gorgeously smooth and creamy spruce shoot ice cream. Tart cranberries are also on offer here in hot caramel sauce, served in a bowl made of ice. I can’t get beyond the mouth-pucker you get with raw cranberries, and nor could anyone at our table.

We’d been drinking Lappin Kulta beer throughout the meal (I am assured this has nothing to do with rabbit-worship), and had become fairly cheerful. Things descended into a boozy mist when I ordered a coffee with brandy in a Lappish kuksa, a birch cup honed completely smooth. A kuksa is velvet-smooth to the touch, and a wonderfully comforting fit in the hand. This was really a mug full of brandy with the barest splash of coffee, and the woody cup gave up a particular and delicious flavour to the drink. I recall starting the drink with relish. I don’t remember finishing it, and the headache the next morning was only alleviated by twenty minutes in the sauna and a lot of cold water.