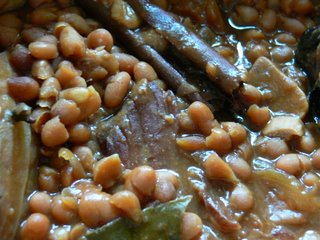 Home-made Boston baked beans are deliciously, wonderfully, shockingly different from the canned variety. When you try these, you’ll wonder just exactly what happened in the long-ago board meeting when Heinz made their plan to pass off their sweetly uninteresting beans as the real thing. There’s so much more going on here than a thin tomato slime surrounding stiff little beans. In beans made properly you’ll find delicately soft beans in a thick, rich sauce packed with clove-studded onions, herbs like bay and cinnamon, and deeply savoury chunks of ham.

Baked beans want your time and your love. You’ll be baking them at a low temperature for six hours, stirring attentively every now and then. Your house will fill up with some really, really good smells. Eat these beans as main course with some good bread, or to accompany a porky barbecue or some pulled pork. This happens to be one of those recipes which improves after a night’s refrigeration, which will help the flavours meld to an even deeper degree.

I’ve used part of a ham I cooked according to this recipe. That ham yielded three meals: the ham itself with fried potatoes, a Pasta alla Medici, and these beans. One of the ingredients in the beans is the liquor the ham cooked in. If you haven’t made a ham yourself, or have made a ham to a recipe which doesn’t yield a sweet cooking liquid, just replace the 500 ml of sweetened stock with 500 ml cola (not diet). It sounds barking, but it tastes divine.

Put the dried beans in a large bowl and pour the cold water over them. Soak overnight. The next morning, simmer the beans in this water in a covered pan without salt (which will make them tough) until they are soft – about an hour.

Heat the oven to 180° C (350° F). Drain the beans, reserving their soaking liquid, and put them in a heavy casserole dish with a tight-fitting lid. Quarter the onion and press the cloves into it, and chop the garlic. Push the ham, onion, garlic, chilli pepper, bay and cinnamon into the beans, stir in the garlic, then combine 500 ml of the soaking liquid from the beans with 500 ml of the ham’s cooking liquid in a jug and stir in the molasses, the maple syrup, the salt and the mustard. Pour this over the bean mixture, put the lid on and put in the oven for six hours.

Stir the beans every hour or so. You’ll notice that very gradually, the beans will take on colour and the sauce will thicken. If you think the dish is looking too dry, add some water to the casserole dish – if you reach the last hour of cooking and the mixture is looking wetter than you would like, remove the lid.

The beans will keep in the fridge for over a week, but they’re so good that you’re very unlikely to be able to keep them in the house for that long without eating them.