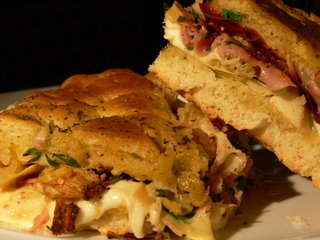 Oozy, garlicky, herby, smoky and greasy. What’s not to like? Focaccia is the ideal bread to make this sort of baked sandwich from. It’s oily, so it bakes to a gorgeous crisp, and it’s a relatively flat bread, so works well sliced in two horizontally. I like to make my own focaccia (the feeling of an oil-enriched dough, stretchy, silky and puffy with yeast is obscenely – there’s no other word for it – tactile against your palms), but this should work very well with a bought one.

To serve four at an al-fresco lunch (with other nibbles) you’ll need: 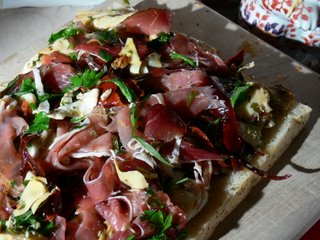 Slice the mozzarella and the artichoke hearts into pieces about ½ cm thick, and put in a mixing bowl. Add the sun-dried peppers, the ham, the garlic, crushed, the herbs, the zest and juice of the lemon and the olive oil with a good grating of pepper (no salt), and mix well so everything is coated with the oil and lemon juice. Cover the bowl and refrigerate for at least an hour (or up to overnight).

Preheat the oven to 180° C (350° F). Use a bread knife to cut the focaccia in half carefully along its equator, creating a top and a bottom for your sandwich. Layer the ingredients on the bottom half of the bread, starting with the mozzarella, then making a layer of the artichokes, peppers and ham, which you can tear into pieces before adding to the sandwich, if you like. Pour the marinade over the ingredients in the sandwich, sprinkle with salt to taste, and put the lid on, pressing down firmly.

Put the stuffed focaccia on a baking tray and bake for 25-30 minutes until the focaccia is golden and crusty on top, and the melting mozarella is oozing out of the sides of the sandwich. Slice and eat immediately.

9 Replies to “Stuffed focaccia with mozzarella, artichokes and smoked ham”