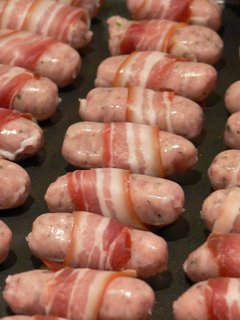 I mentioned the other day that you’re best off not stuffing the cavity of a turkey or, for that matter, a chicken – it increases the cooking time to an unacceptable length, and quite honestly, stuffing is just nicer prepared outside the bird, where it has a chance to go crispy on the outside. The trimmings are one of the most important parts of a Christmas dinner, but they can be a bit of a faff to prepare, so I like to assemble and cook mine on Christmas Eve, and heat them up at the last minute on Christmas Day – you really can’t tell that the stuffing and chipolatas have been reheated, and they’re absolutely delicious.

Buy the very best chipolatas you can find. I was in Yorkshire for Christmas, and went to Booths, which is a simply fantastic supermarket. Quality and choice here is better than at any of the supermarkets we have here in Cambridgeshire (even Waitrose); I ended up with a pack of chipolatas flavoured with chestnut purée which were as good as any butcher’s sausage. Unfortunately, Booths only operates in Lancashire, Cheshire, Cumbria and Yorkshire, so the rest of us are stuck with having to make a trip to the butcher’s for the chipolatas and for the sausage meat which goes in the stuffing, which should be of the best quality you can find.

For Christmas trimmings (or trimmings for any poultry or game you happen to be roasting for a non-Christmas occasion) you’ll need: 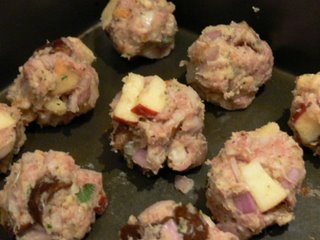 Paxo stuffing mix? Well, despite the memories you may have of childhood Paxo made up by your grandmother to the packet instructions (dusty, squashy and very little fun), it works really, really well when you combine it with sausage meat. The recipe for Paxo is more than a hundred years old; it was invented by a Manchester butcher in 1901. I’m using it here because the wheat and barley rusk that forms the crumbs contains a bit of raising agent, which will make the texture of your stuffing very light, with a crisp outside – and the dried sage and onion are actually really good against a porky background.

Put the stuffing mix in a large mixing bowl with the butter, and pour over boiling water, according to the packet instructions. Stir well and cover with a teatowel while you chop the apple, shallots and chestnuts into small, even dice, and chop the sage finely. When you’re done, the stuffing mix should be cool enough to handle. Use your fingers to mix the sausage meat very thoroughly with the stuffing mix, then add the chopped apple, shallots and chestnuts and sage with a little salt and some pepper, and mix with your hands until everything is evenly distributed. Form into spheres about the size of a ping-pong ball and lay on well-greased baking trays. (The stuffing balls will almost certainly stick a bit, but you can prise them off relatively easily with a stiff spatula.) 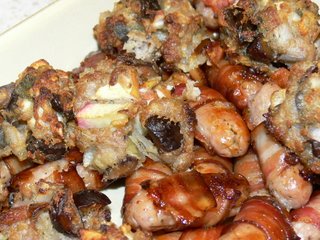 Preheat the oven to 180°C (350°F). Wrap each sausage in a strip of pancetta. You don’t need to secure these with a toothpick (as well as saving you time, this also avoids any Christmas day toothpick-embedded-in-palate accidents). Arrange the sausages on another well greased tray.

6 Replies to “Christmas stuffing and chipolatas”