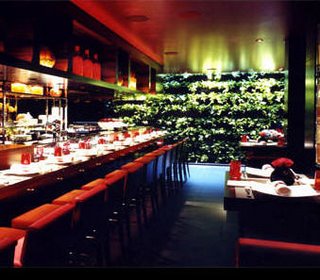 In London for a day of Ladies’ Nice Things, my Mum and I had decided to take advantage of L’Atelier de Joël Robuchon’s (020 7010 8600) set lunch menu (£25 for three courses – cooking at this level is hard enough to find anywhere in the capital, let alone at this sort of price). There is little as good for the appetite as perching on the world’s plushiest bar stools and looking over the open finishing kitchen as a synchronised team of young French chefs waltz around each other in pressed, white formation, whipping potatoes, peeling baby artichokes, and slicing truffles.

We’ll start this one back-to-front, at the point where the bill arrived. We noticed the two glasses of champagne we’d opened the meal with (for what is worth celebrating more than a nice day out with your Mum?) had been omitted from the receipt, and called the server over to ask him to add them on. He didn’t miss a beat, but said ‘Not at all; if the champagne has not appeared on the bill, please accept it with our compliments’.

Good dining’s not all about what’s on your plate. Service, noise level, comfort and the beauty of the room (and this room is like a red and black-lacquered Japanese box with a living wall of leaves) all have their part to play, and here all those elements slot neatly together to result in a real joy of a restaurant. Robuchon, who was named Chef of the Century back in the 1980s by Gault Millau, has 25 Michelin stars divided between his neat squadron of a dozen restaurants in cities all over the world. I’ve eaten in the Las Vegas Atelier and the London one, and quality, style and service are absolutely consistent between the two restaurants.

Meals at l’Atelier are presented either as small plates which the diner can select tapas-style from the menu; as larger plates to be enjoyed as a starter, main course and dessert; or as a dégustation set (£110) of the smaller plates chosen by the chef. Some of these dishes have become famous in their own right and are always found on the tasting menu: the quail stuffed with foie gras; the mashed potato, which is 50% butter and whipped into a cloud of silk. Robuchon’s cooking is of the voluptuously rich school that he was instrumental in founding after France’s flirtation with nouvelle cuisine; your meal here will be smooth with butter and oils and dense with meticulous, slow-cooked flavours.

That lunch menu is a magnificent introduction to Robuchon’s cooking; at any rate, I’m not sure I could cope with the richness of the dégustation menu at lunchtime. There are two choices for each of the three courses, and the menu changes with the day’s market. Salmon rillettes were packed with dill and fresh horseradish (which is, incidentally, making an appearance on market stalls in Cambridge at the moment – local readers should head out and grab a root for a horseradish sauce recipe I’m planning for next week) – hot-smoked salmon whipped into crème fraîche, studded with fat jewels of cold-smoked salmon, accompanied by a sharp salad made from paper-thin slivers of fennel. Soups are always fresh and frequently thick with cream – my broccoli soup had a crouton floating on top, slathered with tapenade and a spoonful of sweet onion confit which reminded me of the French onion soup (so good I’m never ordering it anywhere else again) I had there back in March.

Razor clams are something you seldom see in British restaurants, and I always order them when I see them. They’re a beautiful shellfish, large, sweet and tender to the tooth. These were from Colchester, superbly fresh; and had been removed from the shell, then gratinated with a leek fondue, butter-soft, and Parmigiano. Not a trace of the fine, sandy grit that almost invariably clouds razor clam dishes – and I was thankful for an epi of bread from the basket which staunched some of the butteriness. Patte noir chicken was roasted (I suspect the involvement of a rotisserie grill) to a lovely, butter-aided succulence with a mahogany-crisp skin. We’d asked for a bowl of mashed potato in addition to the lunch menu – even if it’s not on the menu, they’ll find some for you – and agreed we could happily live on the stuff, and possibly in it too.

Wine pairings are suggested for each dish, and we asked for a glass each – a 2007 Montlouis to go with my clams, and a Stonier Pinot Noir from Australia with the chicken. Both beautifully selected, the Montlouis reflecting the butter-sweetness of the clams, and the Pinot Noir really European in character – plenty of fruit, but closer to a Burgundy in style; lovely stuff. I got back from the ladies’ (a dim spot in the excellent design – it’s all very elegant, but the lights in there make you look like the living dead) to find my Mum happily launched on a second glass, which she claimed would help her pudding down.

A set of five slim slices from different tarts is a dessert that usually appears on the £25 menu. I’m not a huge fan of the signature dessert, a Chocolate Sensation (you are likely to be far fonder of chocolate than I am – I suspect it’s a genetic abnormality, given that Mum’s really not into it either). The Chocolate Sensation was the only dessert on offer with the lunch menu, but I asked whether they had the tarts, and five minutes later two helpings arrived, beautifully plated and for no extra charge. And that’s absolutely typical of the service at l’Atelier. It’s both graceful and gracious, and they will bend over backwards to help you – witness the business with the champagne. The tart selection has changed every time I’ve visited, but if you are lucky you might encounter the cinnamon custard on filo pastry or the puckeringly sharp lemon tart. Keeping seasonal produce in mind, there was a strawberry shortcake topped with three perfect fresh strawberries and a sort of raspberry clafoutis arrangement – and even chocolate agnostics like us decided the chocolate, caramel and hazelnut concoction, smooth and dense, was about as good as such things get.

Coffee here is great, but I’d suggest you walk the 100 yards to the Monmouth St Coffee House for my favourite cup of coffee in London if you can get off the barstool. (I am 5’2″. I find such things challenging.) Mum was thrilled with lunch – I believe she’s taking my Dad back to l’Atelier next week for a date.