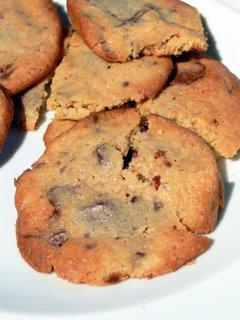 Chillies and chocolate have a lovely affinity; they’re a traditional pairing in South America, where the locals really know how to treat their cocoa. I was making up a traditional toll house cookie recipe – actually, it’s the traditional toll house cookie recipe, as I’ll explain below – yesterday with Dr W (the family that bakes together stays together), and decided to augment the recipe with some fresh Scotch bonnet chillies. Wonderful and potent little balls of fire, they’re one of my favourite chillies. If you’ve not tried them before, be cautious, especially if you find chillies hard to tolerate; these are hot, rocking up at between 100,000 and 350,000 Scoville Units. (The humble jalapeño only rates at between 2,500 and 8,000 Scoville Units, for the sake of comparison.)

Scotch bonnets are closely related to the habanero, but have a very distinct flavour and aroma, fruity and sweet behind all the heat, which I think is just wonderful against chocolate. I’ve only used one here, chopped very finely and creamed in with the butter so its powerful capsaicin (the stuff that burns your tongue off), which is fat-soluble, can work its way smoothly through the cookie dough. The chocolate chunks are a good milk chocolate – nice and smoothly cooling on your tongue against the chilli heat.

The basic recipe I’ve used here is the original toll house cookie recipe – I’ve never found a better. The Toll House was a restaurant in Whitman, Massachusetts, where Ruth Wakefield, one of the owners, was responsible for all the recipes. She came up with this recipe around 1930. Nestle bought the rights to the recipe in 1939 – this ingredients list is from Ruth’s original recipe from the 1947 edition of Toll House Tried and True Recipes, where she calls them Toll House Chocolate Crunch Cookies. (As well as adding the chillies, I have left out a cup of chopped pecan nuts from the recipe – if you want to use them, stir them in with the chocolate bits.) Ruth preferred very tiny, crisp cookies, and only used half a teaspoon of batter for each one, with a much shorter spell in the oven. I like them quite a lot bigger for the squashy middle, and suspect you will too – if you want to make teeny cookies, reduce the cooking time.

Chop the chilli very finely, discarding the seeds if you want to cut the heat down a bit. Sift the flour and salt together in one bowl. In a large mixing bowl, cream the butter and the chilli with an electric mixer (this should take about 2 minutes). Add the sugars gradually, creaming the mixture together until light and fluffy. Beat the vanilla and eggs (one at a time) into the mixture, then the baking soda. Turn the speed of your mixer down to low and add a third of the flour, then gradually add the rest. Stir in the chocolate pieces and drop heaping tablespoons of the mixture onto baking sheets about 2 inches apart to leave space for the cookies to spread.

Bake for between 8 and 10 minutes, until the edges and tops are just turning golden. Allow to cool on the baking sheets for a few minutes so they can firm up a little, then use a spatula to move the cookies to cooling racks (or direct to your mouth).

These are a lovely, crumbly, squashy cookie. They’ll keep in an airtight container for about a week.