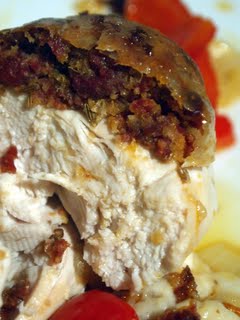 I’m a big fan of the sorts of stuffing you can push into pockets underneath the skin of a chicken, leaving the skin to crisp up beautifully over the savoury filling. Stuffings like these should be fatty enough to baste the chicken from beneath the skin, leaving the meat moist and juicy; flavoursome enough to give their character to every bite of the meal; and reasonably dense, so they don’t swell and leak out of the sides of the skin when you cook them. This one’s an absolute doozy.

I’ve used chicken quarters here rather than a whole chicken – they cook a little faster, you’ll get more nice nibbly crispy bits, and it’s a bit easier to distribute the stuffing evenly this way. To serve four (or in our case two, with some left over for sandwiches), you’ll need:

4 chicken quarters
125g chorizo (use half of one of those dry looped sausages, and choose a good-quality one)
75g fresh white breadcrumbs
Juice and zest of ½ lemon
1 teaspoon coriander seeds
1½ teaspoons fennel seeds
Olive oil
Salt and pepper

If you don’t have any breadcrumbs in the freezer (I usually pop the stale ends of any white loaves in the Magimix and whizz them into crumbs, then freeze them – it means there’s usually a decent supply of breadcrumbs kicking around if I need them), blitz them in the food processor before you deal with the other ingredients.

Put the chorizo in the food processor bowl and reduce it to a rubbly texture, like fine gravel. (You’re aiming for little chunks, not paste.) In a separate bowl, use a spoon to mix the chorizo rubble with the crumbs, the juice and zest of half a lemon and the coriander and fennel seeds, which you will have ground up roughly in a mortar and pestle.

Use your fingers to poke little pockets under the skin of the chicken quarters, and push a quarter of the stuffing mixture into each pocket, pressing so it is firmly packed. Season each chicken piece on both sides with salt and pepper. Heat some olive oil in a large frying pan and brown the stuffed chicken quarters, skin side down, for 5-7 minutes, until the skin is taking on some colour.

Transfer the chicken pieces, skin side up, into a large baking dish. You don’t need to add any more oil – there’s plenty in the chorizo. Roast at 220°C (420°F) for 15 minutes, then turn the heat down to 180°C (355°F) for half an hour. Rest the chicken pieces for a few minutes before serving. We ate this with some halloumi sautéed with red peppers and sweet onions, and some rice, the savoury chicken juices spooned over.