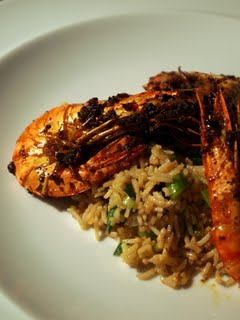 I’m back from a couple of weeks mixing business with pleasure in Florida. More on what we ate later on – for now, here’s a recipe using a curry paste that sprang, fully formed, into my head while we were away.

I went out to Mill Road in Cambridge as soon as we got back to buy some lovely big prawns, still in their shells, at Sea Tree, a new-ish fish restaurant with the city’s only non-supermarket wet fish counter on the far side of the railway bridge; and some fresh spice ingredients at Cho Mee, my favourite of the oriental supermarkets on the town side. It made the whole kitchen smell of South East Asia. Serve the prawns with some fried rice (mine was based around three diced lap cheong, or Chinese sausages, fried until crisp, with spring onions, chopped snake beans, sesame oil and soy, then proteined up with a couple of eggs) or some plain rice and a flavourful stir-fried vegetable. 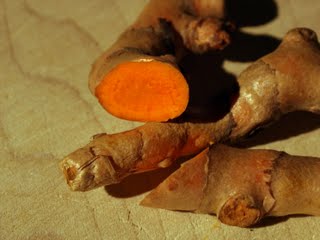 You might not be familiar with fresh turmeric – it usually comes pre-dried and ground in little pots, by which point it has lost the greater part of its slightly bitter, prickly flavour and intense aroma. The picture here should help you identify it if you’re in a shop that stocks ingredients like this (an Indian or oriental supermarket should be able to help you out). Those roots are about the size of your little finger. Be aware that the yellow of the turmeric stains just as badly, if not worse, than the dried stuff does – this is curcumin, an antioxidant that is supposed to be wildly good for you. It’s also wildly yellow. So get ready for daffodil fingernails – they’ll scrub clean eventually, but it’ll take some work. I’ve also used the very aromatic roots of coriander from the same shop, which usually come attached to the leafy herb and are very inexpensive.

Use a sharp knife to peel the turmeric and ginger. Remove the skins from the shallot and garlic and chop the lemongrass into chunks. Put the lot in the bowl of a food processor with the dry spices, the chillies, the soy sauce (I used Kikkoman) and some flavourless oil. Whizz until you have a nearly smooth paste.

Remove half of the paste to a container, cover with more oil and pop in the fridge to use later on. It’s worth always making too much curry paste – it hangs around for a week or so very nicely in the fridge, you can use it in plenty of different recipes, and it’s infinitely less faff than making it as you need it. Put the prawns in a large dish and cover with the remaining half of the curry paste. Set aside to marinade for 45 minutes to an hour.

When you are ready to cook the prawns, heat some more vegetable oil (about half a centimetre’s depth) in a large frying pan to a high temperature. Add the prawns – carefully, they’ll sizzle – to the oil with what marinade sticks to them and fry without moving them around the pan until the top side, not in the oil, has turned pink. Add whatever curry paste remains in the marinade dish to the pan and turn the prawns over. The shells on the side which has been in contact with the oil should have opaque patches alongside the translucent pink. Continue to cook until the other side of the prawns has opaque skins and the curry paste is brown and sticky. Serve immediately – and if you’re bold, you’ll eat the shells and suck the good stuff out of the heads.