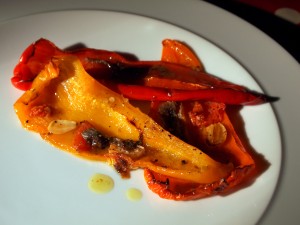 This recipe is based loosely around an Elizabeth David one my Mum used to serve up regularly as a cold antipasto when my brother and I were tinies. We couldn’t get enough of it, and I know he has his own version of the recipe too.

These peppers must be served at room temperature, when they are, unaccountably, much sweeter and juicier than they are when warm. The original version calls for bell peppers, but I’ve found that pointed Romano or Piquillo peppers tend to contain more in the way of fruit sugars and taste far better. (It goes without saying that the peppers you choose should be ripe – red, orange and yellow ones are all find, but avoid the green peppers when you go shopping.) If you have guests whose stomachs are made sensitive by peppers, advise them to peel the indigestible skins off before they eat, which should prevent any upsets.

This is a recipe it’s worth trying out on anchovy-haters, several of whom I’ve brought round using these peppers – not necessarily to a whole-hearted embracing of the anchovy, but at least to a whole-hearted embracing of it in this particular dish. The final result isn’t a fishy one, rather a deeply savoury, umami dish, full of sweet and buttery juices (you’ll use a lot of butter here – it’s worth it) to dip some good crusty bread into. If you love the sweet, fruity bite of a roast pepper (god knows, I do), you’ll find this is one of the best ways to showcase that flavour.

To prepare six peppers as an antipasto (how many you’ll eat depends on how much else you prepare, but you’ll find these disappear quickly) you’ll need:

Preheat the oven to 180°C (350°F). Cut the peppers in half lengthwise, discard any seeds, and chop each half into half again across the short edge. Lay the peppers out in a large baking tray (use two if you have to), the skin side down.

Chop the tomatoes into quarters and put a piece in each little pepper boat. Cut each clove of garlic into four fat slices and put one in each pepper, along with half an anchovy fillet. Cut the butter into small pieces and scatter them all over the dish. Sprinkle everything with a generous amount of salt and pepper, drizzle a few tablespoons of olive oil over the whole dish and put everything, uncovered, in the oven for between 45 minutes and an hour until the edges of the peppers are browning. (The cooking time is imprecise here because a riper pepper will cook faster than a less ripe one – I find this recipe performs differently at different times of year and with different peppers, so you’ll have to use your judgement here.)

Remove the dish from the oven and leave it on the side, covered with a teatowel, until the peppers are at room temperature. Serve with plenty of the juices from the bottom of the dish drizzled over, and lots of crusty bread to soak them all up.