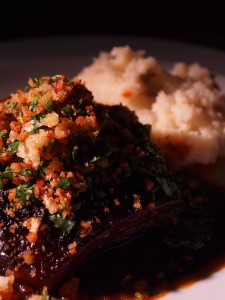 I’ve never been completely clear on why we class cheeks, ox and pork both, as offal. There are no interesting organs here; they’re just muscle and fat, like every other cut of meat on the butcher’s counter. Perhaps it’s because they’re from the head of the animal, inciting a squicky reaction in some – a squicky reaction which I can guarantee those same people wouldn’t apply to a sausage, because they’re not very imaginative. The lengthy ban on the sale in the UK of any cuts from the head or on the bone during BSE made this inexpensive cut disappear for several years, which didn’t do anything at all for its popularity when it returned. You may have to order cheeks in specially at the butcher, but he should be happy to help you.

The meat in an animal’s cheek is tender, rich and basted from within with plenty of flavour-carrying fat. The same goes for fish; when I was a kid, uncles in Malaysia taught me and my brother that the finest bit of a large steamed fish is the cheeks, which we’d pop out with chopsticks and fight over. (A fish-head curry is a fine, fine thing.)

I’ve braised this cheek for hours in a very dense stock-based sauce, and sprinkled some crisp crumbs with herbs and lemon zest over to lift the texture and flavour. Eagle-eyed readers will realise that I’ve nicked the star anise idea, which also brightens the flavour profile of this dish very handsomely, from Bob Bob Ricard. The stock you use is very important, and should absolutely not come from a cube. A good home-made beef stock is essential here. You may find some ready-made alongside the dripping at your butcher’s, but it’s worth making a large pot of your own, some of which you can freeze, and including a roasted marrow bone, some shin or some tail to thicken and beef the stock up. (Sorry.)

Chop the onion, carrot and celery into rough dice. In a large casserole with a lid, sweat the vegetables in a couple of tablespoons of olive oil until the onion and celery are becoming translucent, but not taking on colour. Pour over the liquid ingredients and stir well. Slide the ox cheeks into the casserole with the bay and star anise, season generously, and bring to a gentle simmer.

While the cheeks are cooking, prepare your crumbs – for maximum crispiness, do it towards the end of the cooking time. In a large frying pan, sauté the crumbs, moving all the time, in two tablespoons of olive oil until they are golden brown. Remove them to a small bowl. Chop the tarragon and parsley finely and zest the lemon. Stir the herbs and zest into the crumbs with a large pinch of salt and set aside until it’s time to serve the cheeks.

Skim any excess fat off the top of the casserole. Remove the star anise and bay, and discard. Use a skimmer or slotted spoon to fish the cheeks out of the casserole and rest somewhere warm while you pass the sauce through a sieve, using the bottom of a ladle to push the soft vegetables through. Bring the strained sauce back to a simmer.

To serve, ladle a generous puddle of sauce onto a plate, sit a cheek in the middle of the puddle and sprinkle the crumbs over the top. Mashed potato is the perfect accompaniment to this rich dish – you’ll need lots to mop up the delicious sauce. I also served some purple sprouting broccoli (it’s that time of year) dressed with lemon juice and butter, and sprinkled with some toasted pine nuts.