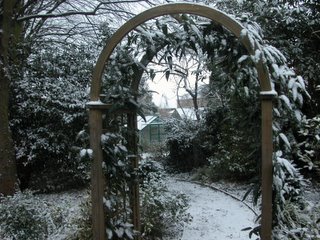 Christmas dinner for twelve people is a tricky one. Several of the people present admitted that they didn’t like turkey, some had moral issues around the consumption of ducks (no, I don’t get it either) and no goose this large was going to cook without being dry. Was any bird outside the Emperor Penguin going to be big and festive enough? Would those who had been to see March of the Penguins forgive me? Were dead, French-trimmed penguins readily available in Cambridgeshire?

Eventually I decided that this was unlikely, and remembered that cows come in handy, family-sized joints. I ran straight to Waitrose and ordered a whole sirloin of beef – at £60, this works out as surprisingly good value when you realise it will easily serve twelve with ample leftovers.

Cambridge boasts an excellent Italian delicatessen in Balzano’s at 204 Cherry Hinton Road (01223 246168). I spent a further £25 on 40 large, paper-thin slices of prosciutto, and £15 on ten small, Italian packs of porcini (cepes). I love Balzano’s. It’s a short walk from my work, and they sell every antipasto you can think of: huge jars of artichoke hearts in olive oil, enormous Kilner jars of anchovies, tubs of fresh pesto, roast vegetables and tiny capers. They also stock excellent Italian preserved goods: Barilla pastas and sauces, tins of traditional fennel sauces, nut and chocolate confections and a healthy line in fascinating little biscuits.

Having bought Balzano’s out of Panforte di Siena and the oddly German (but still welcome) packs of lebkuchen, I carted my treasure home, refrigerated it all until Christmas day, then drove it to my parents’ house first thing in the morning and got cooking. Mum and Dad’s house made sense in that they have twelve chairs to my six, a large table to my small one, an Aga and a conventional oven, as well as four gas hobs and two Aga ones. Mr Weasel and his family followed on later, wisely keeping out of my harried way. 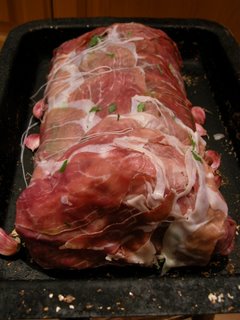 I rolled out two sheets of greaseproof paper large enough to wrap the sirloin in, and laid the ham in a thick, unbroken layer on top of it. I soaked the mushrooms for half an hour in hot water from the kettle, and, keeping the soaking water aside, fried them in quarter of a pat of butter with a bulb of chopped garlic until the liquid had evaporated, leaving them glossy, then added the juice of a lemon and a glass of Marsala. When this had bubbled away as well, I spread the nearly dry mushrooms and garlic on the ham, reserving a small handful, and covered them with a thick layer of of chopped tarragon, parsley and sage. I placed the raw sirloin on top of the layered prosciutto, mushrooms and herbs, and used the greaseproof paper to wrap it in them, Swiss-roll style, folding ham over the ends and tying the whole bundle tightly. I put it in a large roasting dish, with another bulb of whole, unpeeled cloves of garlic tucked in around it.

These photographs, incidentally, are the reason you’re reading this a week and a half after Christmas. I remembered all the meat but forgot my camera, and had to use my Dad’s. The bits of handshaking which meant the pictures from his camera would end up on my computer ended up rather more complicated than they needed to be . . . still, they’re here now, so read on. 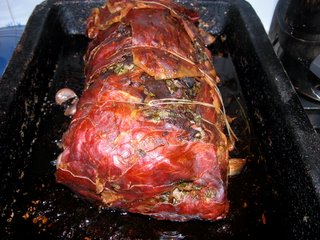 A beef sirloin will cook amazingly fast, even one of this size. Mine needed an hour and a half in the top (roasting) oven of the Aga, which runs at around 190c. The best way to tell how yours is doing is to use a meat thermometer, stabbed into the middle of the joint before you start to cook. Keep an eye on the thermometer from 45 minutes into the cooking time. When the needle reaches ‘rare’, take the joint out and rest it on a serving dish for ten minutes.

I deglazed the juices and sticky deposits in the pan to make an intense, rich gravy with the mushroom stock, the reserved mushrooms, half a pint of Marigold vegetable stock, another two glasses of Marsala and half a pint of crème fraîche, all simmered until reduced and silky. 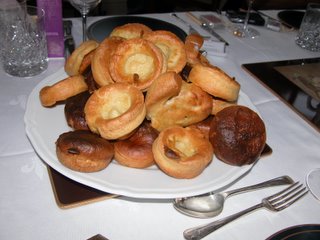 After a starter of gravadlax, with a homemade dill sauce and foie gras with quince jelly, we launched upon the main course. And a happy silence fell on the chattering table, which is the best Christmas compliment I could have had. I’m already looking forward to next year, when perhaps I will get my hands on that penguin. 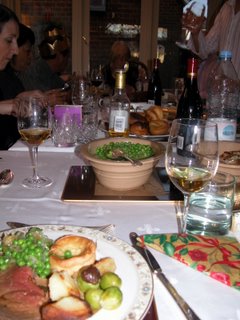 4 Replies to “Whole sirloin of beef with prosciutto, porcini and herbs”