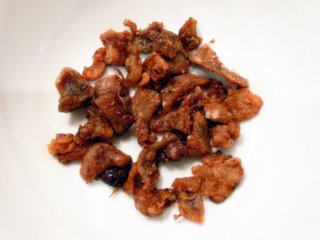 The UK’s most splendid pub snack is, for my money, a lovely salty bag of pork scratchings. These aren’t at all like American pork rinds, where the skin from some pork is separated from the fatty meat and baked; the English version uses that fatty layer which, along with the crackling skin, is rendered into a fatty, crunchy, salty mouthful that’s perfect with a beer.

When we lived in France, Dr Weasel and I discovered that there’s something even better than pork scratchings: duck scratchings. Ducks which are raised for foie gras don’t end their usefulness with the sacrifice of their liver. Their plump breasts are sold as magret de canard; their fatty thighs and wings are preserved in confit; and the bits of fat from inside the bird and the trimmings of skin are rendered down for cooking fat. The crispy bits, or gratons, left over from the rendering are sold in some French charcuteries as a snack to accompany drinks. They are light, crisp, puffy and delectably ducksome.

My Dad was cooking a couple of ducks the other day, so we saved the extra skin and the poultry fat from inside the birds to render. The best way to do this is in a frying pan on the hob; baking the gratons will make them cook down unevenly, and may result in some burning.

Cut the pieces of skin and poultry fat from one or more ducks into pieces about an inch square in size. They will shrink dramatically when cooked. Spread out in a single layer in a frying pan and place over a low heat for about an hour, periodically pouring off the liquid fat that renders out. (Save it in a bowl and refrigerate it when you’re done; you can use it for making perfectly crisp sautéed or roast potatoes.)

Continue to cook the gratons, turning and draining occasionally, until they are crisp and an even gold colour. Use kitchen paper to absorb any extra fat – your gratons should be dry to the touch and puffily crisp. Season with salt and pepper and serve warm with drinks as a pre-dinner snack.

I’m leaving for America for a few weeks tomorrow morning. I’ll try to keep the blog updated, but I’m hoping the wireless provision at the Horizon Casino Resort in Lake Tahoe has improved significantly since last year. I’ve somehow managed to score a booking at Picasso in Las Vegas too, which is tremendously exciting – watch this space for a review.