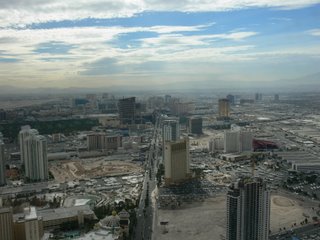 Update, Jan 2008 – there are now a lot more reviews of Las Vegas restaurants on this site. Click here to read them all.

I’m back from a couple of weeks’ holiday. Regular readers will notice that I’m a frequent visitor to Las Vegas. Being a neophobe, I decided to squeeze four days of Vegas into the start of the trip. Las Vegas wins my favourite city prize even though I don’t gamble – it has a remarkable concentration of world-class restaurants, some of America’s strangest visitor attractions and some amazingly good bars, clubs, shows and other night-time diversions for the jetlagged.

If you’re a first-time visitor, the sheer choice of restaurants can be overwhelming. These are just a few of the Vegas restaurants that will make your toes curl with gustatory pleasure.

Stripsteak is a new Michael Mina venture at the Mandalay Bay resort and casino (my favourite place to stay in Las Vegas – it’s at the very southern end of the strip, so you can get away from the crowds in some degree of style). Mina is known for his Californian-inspired fine cuisine, and was named Bon Appetit’s chef of the year in 2005. Stripsteak is a bit of a departure for Mina, whose other restaurants tend to be very exclusive, with menus specialising in seafood; at first glance Stripsteak looks like yet another Vegas steakhouse. What a steakhouse, though. The menu is overflowing with Kobe beef, truffles, duck fat and other riches. I can recommend the obscenely good duck fat fries, the perfectly tender and flavourful American Kobe ribeye, the truffled mac and cheese and the carpaccio (potently but not aggressively flavoured with Thai spices) wholeheartedly. (How long the arteries surrounding that heart are going to hold up at this rate is a matter of opinion.) 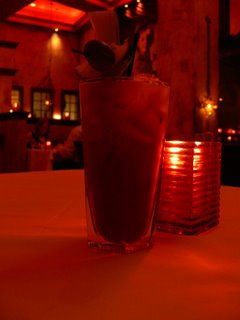 Red Square, also at Mandalay Bay, is best known as a bar and nightclub. It’s almost intimidatingly hip: there’s an ice bar; a frozen vodka locker where you’re provided with fur coats and hats for tastings; a headless statue of Lenin; and a air of decayed Imperialism. The restaurant, in the face of all this coolness, is often overlooked by guidebooks which are overwhelmed by the excellent bar. This makes this place one of the best-kept secrets in Vegas. Don’t go expecting traditional Russian cooking – Red Square has a high-class but decidedly modern American menu with the occasional twist like Siberian Nachos (won ton crisps with smoked salmon and wasabi tobiko). Try the farmed America sturgeon caviar, which is a fraction of the price of the Iranian stuff also on offer, but just as good. It’s served with a mother-of-pearl spoon, with your choice of blinis or toast points and all the traditional accompaniments. The Roquefort-crusted steak is one of the best in town – and the Martinis and other vodka cocktails are to die for.

Shibuya, a Japanese restaurant at MGM Grand, serves glorious food and gilds the lily with its enormous sake list, employing a specialised somellier. The staff couldn’t be more helpful; last time I visited we asked to move tables when the restaurant was full to escape from some obnoxious neighbours, and were accommodated immediately and without fuss. Toro tartar was glorious, and the miso snow crab legs were fresh, sweet and tender. 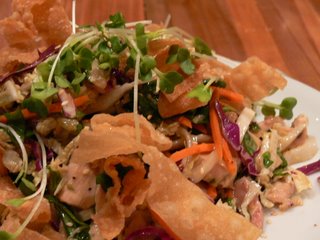 Chinois, a Wolfgang Puck property at the Forum Shops, is another restaurant which transforms into a club at night. The upstairs club area is beautiful, but I prefer to visit at lunchtime, when the restaurant is quieter. (Felicity Huffman from Desperate Housewives decided to have lunch there on the same day I did, which I found quite stupidly exciting.) There’s one overarching reason to visit Chinois, and that’s the Chinois Chicken Salad, a light, crisp confection which I would happily sell my own grandmother for. The restaurant is perfectly happy for you to only order appetisers if you want a lighter lunch.

Jean-Philippe Patisserie at Bellagio is not only host to the world’s largest chocolate fountain, it’s also the most consistently excellent patisserie I’ve found anywhere in the world (this after a stint living in Paris and a late twenties spent searching London for the perfect macaroon). Jean-Philippe Maury won the Gold Medal from the 2002 World Pastry Team Championship, and if you are up for afternoon tea or a stellar breakfast, you should drop in. If you can avoid being seduced by the fresh crepes or the gorgeous ice-cream made on the premises, try the Strawberry (made from a slice of crisp macaroon, an almond paste and fresh glazed strawberries), the Exotic (a prize-winning tropical fruit and coconut confection) or the Rose Macaron (raspberry and rose macaroon). 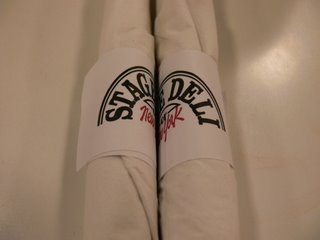 For a savoury breakfast, I’ve found nothing in the city as good as the Stage Deli at the Forum Shops – it’s much, much better than other places serving breakfast mid-strip, so if you’re staying at Caesar’s, the Mirage or TI…or anywhere else, for that matter, head on over. Stage Deli is a branch of the well-known New York deli, but fortunately they have managed not to import the famous New York attitude along with the corned beef. Try the pastrami hash or smoked fish and bagel for breakfast, and any of the giant sandwiches for lunch.

Las Vegas is, of course, famous for its buffets. The food at the buffets is never as good as you’ll get at a restaurant with service, but some of the casino buffets stand out – Le Village Buffet at Paris is one of the better ones, but my very favourite is at Bellagio, where the breakfast boasts an excellent Asian station with congee and pork floss. The slab-carved salmon is smoked in-house – it’s excellent and is served with all the trimmings. Quality remains high across the spread. At weekends, the casino offers a champagne brunch and gourmet dinner at the buffet.

I’m saving our visit to Picasso for another post, simply because it was completely outstanding: absolutely the best meal I’ve ever had, even after years of chasing tables with Michelin stars in France. Watch this space. **Update – the whole review is here.**

One Reply to “Dining in Las Vegas”