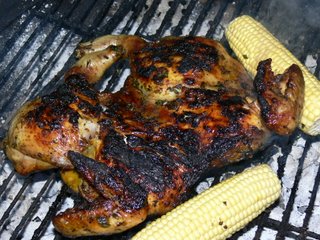 I hope you read through the spatchcocking instructions yesterday (my spellchecker doesn’t recognise ‘spatchcocking’, and suggests I use ‘knocking shop’ instead – honestly). If you didn’t, have a quick look, then come back here. This recipe will have you marinating a whole bird in some extravagantly delicious paste full of lemongrass, chilli and coriander, then grilling it over hot charcoal. It’s my version of a recipe that’s originally from Laos. When I lived in Paris, most weekends found me face-down in a plate of sticky rice, Ping Gai (the Laotian term for what the Thais and subsequently the Brits call Gai Yang) and Laotian wind-dried beef at Lao Lanxang (105, Avenue Ivry, 75013 Paris). This is a handsome treatment of a chicken, aromatic, sweet and smoky from the grill.

The recipe is also found in the Issan province of Thailand, and has now been subsumed into the melting pot of Thai food, so it’s in Thai restaurants that you’re most likely to find it in the UK – but if you’re intrigued by food from Laos (and you should be – it is fascinating and delicious), read Natacha du Pont de Bie’s Ant Egg Soup, a foodie backpacking travelogue with a handful of recipes at the end of each chapter that takes you all over the little country, sampling marvels like silkworm grubs, river algae and bottled chicken. The book seems to be out of print now, but there are plenty of copies available second-hand at Amazon. 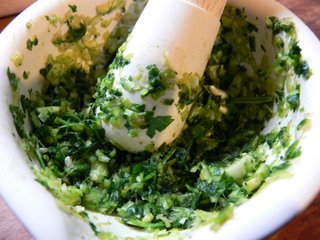 Chop the lemongrass, chillies, garlic and coriander coarsely, and put them in a pestle and mortar. Bash and squash until you have a rough, emerald-coloured paste, as in this picture. (Don’t worry about squishing everything until it’s completely smooth – you are aiming to break the cell walls to make an aromatic paste, and this sort of texture will be fine.)

Transfer the green paste to a large bowl, big enough to fit your chicken in, and add the other ingredients. Stir well to combine all the ingredients, and slip the chicken into the bowl, turning and spooning so it’s well covered with the sauce. Refrigerate, covered, for 24 hours, turning occasionally in the marinade.

When you are ready to barbecue the chicken, bring your charcoal up to temperature and set the grill high above it. Ideally, the chicken should cook relatively slowly, to prevent the delicious skin from charring too much. The spatchcocked chicken will lie flat, which helps it cook evenly. Stand over your chicken as it grills, turning it every couple of minutes (again, this will help to avoid the skin from turning too black), and basting each time you flip the chicken over with the remaining marinade from the bowl. After 20 minutes, poke a skewer into the fattest part of the chicken at the thigh. If the juices run clear, you’re done – transfer the chicken to a plate to serve. If the juices are still pink, give the chicken another five minutes and repeat the test until you’re satisfied it’s cooked.

Serve with rice and some grilled corn cobs, drizzled with lime juice.