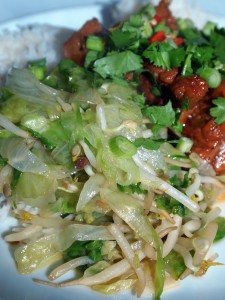 I’ve never really caught on to this British idea of the lettuce as mere salad vegetable. The Chinese aren’t alone in cooking them; you’ll find lettuce simmered gently in French soups and especially in dishes with peas. Cooked, the lettuce becomes silky and sweet; a totally different beast from the salad leaf you’re used to.

In China, you’re much more likely to find a lettuce cooked than raw. This preparation works very well with the spicy, rich, Vietnamese caramel pork from the other day; in Chinese terms, its clean, fresh flavour would be described as being Yin, against the Yang of the pork. This philosophy of food strives to balance the body – if you are prone to cold fingers and toes, and have a slow heart rate, you’re considered to have an excess of Yin. If you’re sleepless, sweaty or jittery,  Chinese grandmothers would tell you you’ve too much Yang. Yang foods tend towards richness: think chestnuts, squashes, onions and garlic, meat, ginger, coffee, alcoholic drinks and fruits like peaches, mangoes and cherries. Apples, bananas, asparagus, watermelon (as distinct from cantaloupe, which is Yang), shellfish, lettuce, beansprouts, citrus fruits and cucumbers are among the foods considered Yin.

I live in a post-enlightenment age, and do not think my cold fingers are due to an excess of lettuce, rather an excess of typing. But it’s still an interesting philosophy which works surprisingly well to help you balance the flavours in a meal. In Malaysian Chinese households, you’ll often be offered a Yin mangosteen to accompany the excessive Yang of a durian, for example; the two work together exceptionally well. Try this dish, which only takes minutes to cook (and is only Yanged-up slightly by the chicken stock, rice wine and a little garlic) to accompany fierce and rich flavours like Monday’s pork. To serve two generously, you’ll need:

Bring a small amount of oil to a high temperature in a wok. Throw in the sliced garlic and stir-fry for ten seconds, then add the beansprouts to the pan and continue to cook, stirring all the time. After three minutes, add the liquid ingredients, bring to a simmer and add the lettuce. Cook, stirring, until all the lettuce is wilted, and serve immediately.