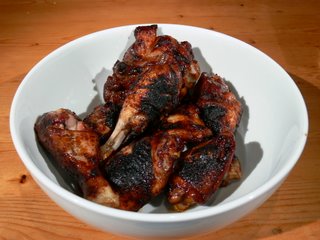 This was meant to be sticky barbecued chicken, but we in Cambridgeshire are living through history’s wettest drought (hosepipe bans, drought orders and torrential rain all in a very aggravating welter). The barbecue flame took one look at the sky and went out immediately when I rather foolishly lit it in the five-minute window of good weather on Sunday. Not to worry – this is a recipe which does very adequately under the grill too.

The recipe is one which was given to my Mum by a friend who very sadly died of breast cancer quite recently. If you cook it, it’d be great if you could perhaps look at buying some fabulous pink wellies from Breast Cancer Care, or giving them a donation.

Sue’s recipe comes with a bonus satay sauce which uses the marinade as an ingredient. When you’re making the sauce, be careful to simmer it hard to cook off any raw chicken juices. The marinade itself is extremely penetrating (a characteristic of many treacle or molasses-based marinades), so don’t marinade for more than six hours. Chicken kebabs are also very successful in this marinade. To cook two pounds of chicken pieces you’ll need:

Easy as anything – just mix all the marinade ingredients together and marinade the meat for five or six hours. Grill or barbecue until the marinade on the skin is beginning to caramelise. 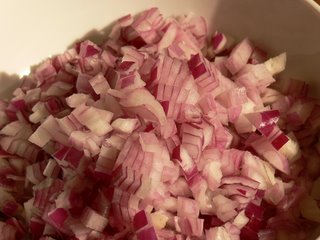 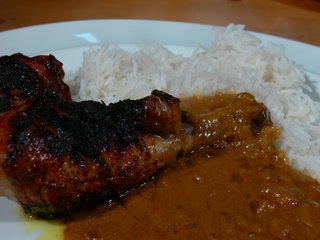 Fry the onions, garlic and spices in the oil until the onions are soft and transluscent, then add the peanut butter, salt and coconut milk. Simmer for twenty minutes with two tablespoons of the marinade you used for the meat. Some of the oil will be released from the coconut as you cook – you can use kitchen paper to absorb it if you feel there’s too much. Season to taste.

This sauce is remarkably close to Malaysian satay sauces (without the lemongrass, and substituting the treacle for the palm sugar). Give it a spin – I think you’ll like it.