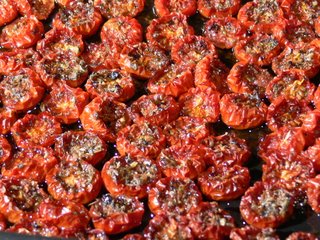 The recent glut of tomato recipes (the result of a glut of tomatoes) should end with this one, I hope; semi-preserving tomatoes by roasting all the moisture out of them and marinading in olive oil produces something so good that I think I’ll be roasting all my future tomatoes too this year. It’s a good method for dealing with large number of tomatoes, because when cooked in this way they reduce in volume so dramatically. The few pounds of raw tomatoes I cooked here resulted in about a jam-jar full of finished tomatoes.

Imagine how a tomato might taste if it was twenty feet tall and made of sunlight shining through a piece of red stained glass. Slow-roasting will transform your garden tomatoes into Platonic tomatoes of perfection, more tomato-ish than the juiciest tomato salad. The long, long cooking shrinks the tomatoes, concentrating their flavour – your whole house will smell of sunshine. Start this recipe in the morning; you need to keep the tomatoes in the oven for about seven hours. There’s very little actual work involved, though; once your tomatoes are cooking, you can forget about them for the day.

My tomatoes were the cherry-sized Tumbler. If you have a larger variety, you will need to cook them for longer. You’re aiming for a texture which is not quite dry, but not juicy. Test your tomatoes every half hour or so after seven hours to check for texture. (Try not to eat them all while you test. It’s quite a challenge.)

For one tray of tomatoes you’ll need: 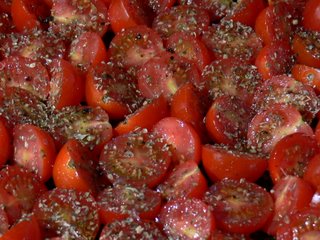 Arrange the tomatoes in a single layer, cut sides up, on a baking tray. Sprinkle over all the dry ingredients evenly, and drizzle olive oil over the cut surfaces. Make sure you use plenty of freshly ground black pepper, which will help the tomatoes’ flavour sing.

Place in a low oven (100° C – you are aiming to dry rather than cook) for seven hours until the tomatoes are no longer juicy. Pack them with their oil into a jar, top up with some more olive oil and seal. Add half a clove of grated garlic to the jar if you want even more flavour to your tomatoes. The tomatoes will keep in the fridge for up to a week, but since you are unlikely to be able to open the fridge without being tempted to eat a spoonful in that time, they probably won’t be around for long enough for you to find out.