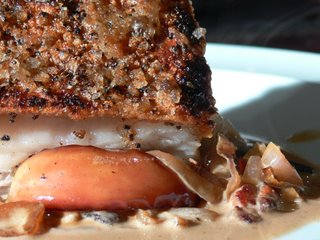 Pork belly is a fabulous cut. It’s striated with layers of fat between the layers of sweet meat, which, when cooked slowly, melt and baste the joint from within. The English finally seem to be catching on to the idea that belly pork is a good, good thing. I challenge you to find a gastropub menu that doesn’t feature belly pork. It pops up much more often in all kinds of restaurants than it used to (I remember a time not so long ago when the only restaurants serving it were in Chinatown), and it’s appearing much more frequently in supermarkets, so you no longer have to ask for it specially at the butcher’s. It’s also a pleasingly inexpensive cut of meat; you’re paying mere pennies for one of the tastiest bits of the pig, which represents real value.

Pork and apples are natural friends, so I’ve served this slow-roasted joint and its crackling with a cidery, creamy shallot and bacon sauce, and slices of sweet fried apple. Gather your windfalls now – this is a perfect autumn dish.

Preheat the oven to 150° C (300° F). Use kitchen paper to dry the pork rind well. Score rind of the belly pork in lines about half a centimetre apart with a sharp craft knife, and rub it with salt and pepper. Cut the onions in half and place them, flat side down, in a metal roasting tin, then rest the pork on them – the onions should form a platform for the pork so it doesn’t touch the hot tin and sit in its own fat.

Put the pork in the oven for 3 hours and forget about it. When the time is up, turn the heat up to 200° C (400° F) for a final 20 minutes. Remove the pork from the oven and put it under a hot grill until the skin crackles evenly (about five minutes). Keep an eye on the pork under the grill – it is easy to singe the skin. Finally, leave the pork in a warm place to rest while you prepare the sauce. 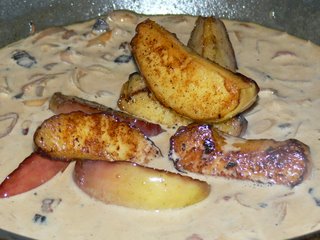 Chop the bacon into little lardons and fry without any oil in a non-stick frying pan. When the bacon is crisping up, remove it to a bowl, keeping any bacon fat in the pan. Slice and core the apple, leaving the skin on. Fry the apple slices in the bacon fat until golden and set aside. (If the bacon hasn’t released enough fat, use a spoonful of pork fat from the roasting tin.) Finally, slice the shallots finely and brown them in the bacon fat over a medium flame. Keeping the pan on the heat, add the bacon to the pan, pour over the cider and bring it to the boil for two minutes to burn off the alcohol. Add the crème fraîche to the pan and stir well, and finally add the cooked apples.

Serve the pork on a bed of the sauce and apples with some mashed potato and a green vegetable.