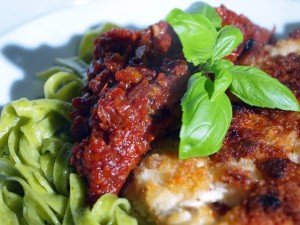 Stupendous because, really, there is no other word for this stuff. It’ll take you the best part of a day to make, although there’s not much real work involved, just a bit of stirring every half hour or so – if you’re going to be around the house all day, just carry a timer with you set to go “bing” every half hour to remind you to go and stir the sauce. You’ll use up two kilos of those tomatoes you’ve got ripening away in the greenhouse, and you’ll finish with a sauce that tastes like pure condensed summer. It freezes well – I have a few boxes of this sauce in the freezer to be hauled out in the middle of winter, when tomatoes are indistinguishable from potatoes.

The idea here is to drive as much of the moisture as possible out of sweet, summery peppers and tomatoes, encouraging their natural sugars to caramelise. The tomatoes you choose should be the very best you can find. This recipe is fantastic for gardeners with a glut of tomatoes, but you can make it with good tomatoes from the market too. Just make sure you use the sort of tomatoes that you’d be happy to snack on raw; the sort where you suddenly discover you don’t have any left because they were so good you accidentally ate them all without noticing.

This sauce is beyond fabulous on its own, dressing some pasta – if you can find Giovanni Rana fresh pasta at your local supermarket or deli, the basil and spinach fettuccine is a great match, with its intense basil aroma. For plain pasta, throw a few basil leaves and maybe some oregano over when you serve. I also love it as a sauce for chicken breasts that have been butterflied, beaten flat, breaded and fried crisp (you don’t need a recipe for those – just put the butterflied breasts between two pieces of cling film; wallop the hell out them with a rolling pin; then flour, egg and crumb them before frying for five minutes on each side); it’s great mixed with some grilled vegetables or as a sauce for grilled, oily fish too. You can use it as a dip, in sandwiches, as an enriching ingredient for other sauces, as a base for soups – versatile, delicious, wonderful stuff.

To make about 12 servings (you’ll be freezing these in individual portions, and with something that takes so long to cook it seems a waste to make any less) you’ll need: 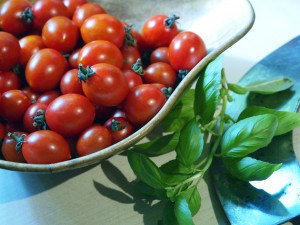 Blitz the bell peppers with the onions in the food processor. You’re aiming for a rough, wet puree. Put the resulting glop in your biggest saucepan (preferably something with a heavy base that will disperse the heat evenly – I have a giant le Creuset casserole which is perfect for this sort of thing) with the butter and cook over a medium flame without a lid, stirring occasionally, for about an hour. Eventually, the peppers will start darkening in colour, most of the liquid will have been cooked off, and the whole arrangement will have a jammy texture. It may take more than an hour to get to this stage, depending on the water content of your peppers and the diameter of your pan.

Puree the tomatoes with the peeled garlic. Add them to the jammy contents of the saucepan with the olive oil and stir well to make sure everything is combined. Now go and busy yourself doing whatever it is you do when you’re not cooking, being sure to return to the pan every half hour to stir it, scraping the bottom and moving the sauce around the pan. After a few hours, as the sauce thickens, start returning to the pan every 15 or 20 minutes if you feel it is in danger of sticking when left for half an hour.

Again, timing here varies on your tomatoes and your pan, but around six hours (maybe more) after you first put the tomatoes on the hob, the contents of the pan will have reduced by more than half. The sauce will be fabulously gloppy when stirred, and will be darkening and beginning to give up its oil.  No tomato juice will rush to the surface when you press down on the sauce with a wooden spoon. Taste the sauce, which should look a bit like rusty sun-dried tomato paste, try not to jump too high for joy at the intense, umami flavour, and season.

I freeze this sauce in 250g bags – enough to serve two generously. Your yield should be about six bags, give or take. Unfrozen, the sauce will keep in the fridge for about a week.